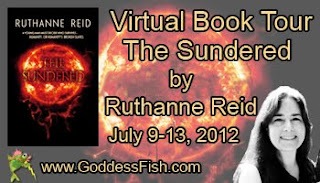 This blog is part of a virtual book tour organized by Goddess Fish Promotions. Ruthanne will be awarding a $5 Amazon GC to one random commenter at every stop and a $50 Amazon GC to a randomly drawn commenter at the end of the tour.

Thanks so much for having me here! 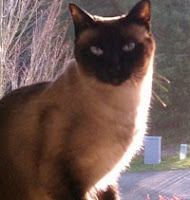 Well, my workspace is a little unconventional. It's constantly evolving, mostly around the kitty who pops in to inform me of things in a regular basis (such as, "there is no gooshy food," and "why is there no gooshy food?" Also, he says, "there is another cat outside, and possibly a bird.").

He's a permanent fixture wherever I work, unless I've gone to Starbucks. They don't like cats there.

Kitty Reid shares my warm blanket, and my lap, sometimes forcing me to leans sideways while I type around him. He blocks my view by filling my windows. He also blocks the windows on my computer. Happily, he never blocks my words, although he sometimes types (not Pulitzer prize material, but he does lack thumbs). Once, he even destroyed (read: enhanced) my laptop last year by rubbing his face on it so enthusiastically he knocked it onto the floor.

But don't think of him as evil. Really, he just wants to help. 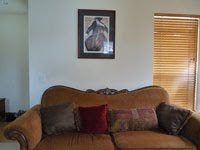 The thing about Kitty is he makes my workspace WORK because he lends to the atmosphere. For me, a writing space isn't about the furniture, the desk (or lack of, as is my current condition), the music, or the knickknacks. It's all about atmosphere. Is there peace around me? What about a sense of purpose, of focus, of drive? Am I free to work, or plagued by guilt/people staring over my shoulder/weirdos? Places like libraries, coffee houses near college campuses, and cafes are great for concentration because there's something about the presence of other creatives that makes my brain turn neon-yellow with new ideas.

The best part? I get to enjoy this in my own home. My husband and I share our house with a full-time artist, a fantasy-romance genius named Celine Chapus. She works upstairs, and I work down, while my husband works from his home office in-between. The vibes of our little artist's commune set the whole home on fire. It's quiet, but not oppressive – video games, music, and laughter pierce it and keep it from getting too serious.

So does my cat. He's not declawed, you know.

About the Author: Ruthanne Reid was raised in the woods, but fortunately, her isolation was offset by regular visits to New York City. She pursued music for years before realizing she wanted to tell stories rather than sing them.

Ruthanne writes in and around Seattle, owns dust-covered degrees in music and religion, and is generally considered dangerous around household electronics. Her favorite authors tend to be dramatic (J. R. R. Tolkien, Neil Gaiman, Patrick Rothfuss), but she doesn’t see this as a bad thing. She belongs to a husband, a housemate, and a cat, respectively.

The Sundered is her first novel.

Don’t touch the water, or it will pull you under. Conserve food, because there’s no arable land. Use Sundered slaves gently, or they die too quickly to be worthwhile.

With extinction on the horizon and a world lost to deadly flood, Harry searches for a cure: the Hope of Humanity, the mysterious artifact that gave humans control over the Sundered centuries ago. According to legend, the Hope can fix the planet.

But the Hope holds more secrets than Harry knows. Powerful Sundered Ones willingly bow to him just to get near it. Ambitious enemies pursue him, sure that the Hope is a weapon. Friends turn their backs, afraid Harry will choose wrong.

And Harry has a choice to make. The time for sharing the Earth is done. Either the Sundered survive and humanity ends, or humanity lives for a while, but the Sundered are wiped out.

He never wanted this choice. He still has to make it. In his broken, flooded world, Hope comes with a price.

Mary Preston said…
Thank you for sharing. Your workspace sounds like it's conducive to activity & creativity.

Rita Wray said…
Sounds like your Kitty likes to be involved in your work.
Kit3247(at)aol(dot)com
11:45 AM

Unknown said…
Thanks for hosting me here, Judy! I appreciate the chance to interact with your readers.

Marybelle: I find it very stimulating. I'm not sure if that makes me an anarchist. ;)

Unknown said…
This comment has been removed by the author.
4:29 PM

Catherine Lee said…
There are some cats who INSIST on being in the middle of whatever their human companions are doing. Of our four, the oldest--Missy--must come and sprawl out on my hubby's papers when he's working. When I'm working on my netbook, she'll come and start rubbing the corner and then licking it if I don't give her some attention. She can be very demanding.
catherinelee100 at gmail dot com
9:52 PM

Unknown said…
The winners have been posted, fyi! Go here to see the results:

(Ingeborg, you won the five-dollar gift card! I'm sending you an email!)

Rebecca Hipworth said…
I adore cats, they're so cute. :)