Posted by Judy on September 27, 2007
Buy a Friend a Book Week is October 1-7 (as well as the first weeks of January, April, and July). During this week, you’re encouraged to buy a friend a book for no good reason. Not for their birthday, not because it’s a holiday, not to cheer them up–just because it’s a book.

What book would you choose to give to a friend and why?

And, if you’re feeling generous enough–head on over to Amazon and actually send one on its way!

It depends on the friend. Lianne would probably get Brandilyn Collins' new book or something Scottish. Marianne would have to get something with HEA. Everyone has different tastes. And, books are very personal. 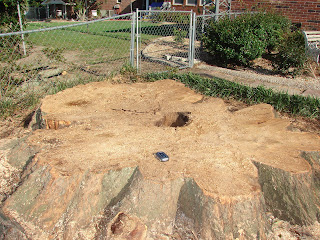 I laid my cell phone on top so you could get an idea of the massiveness of this stump. It was a whopper.

Bridget said…
I'm glad I'm not the only one saying "It depends" - I mean, I guess if I absolutely HAD to, I could think of one book, but who wants to give everyone the same thing??
8:06 PM

Anonymous said…
Yes, books are personal. So one needs to select very carefully!
5:09 AM

Alice said…
I agree with you, Judy. It is certainly a personal thing. Happy belated BTT!
11:19 AM