Win a $25 GC: A Maiden's Honor by Josanna Thompson

This post is part of a virtual book tour organized by Goddess Fish Promotions. Josanna Thompson will be awarding a $25 Amazon or Barnes and Noble GC to a randomly drawn winner via rafflecopter during the tour. Click on the tour banner to see the other stops on the tour.

What was the hardest part of writing this book?

I am a good story-teller, but I’m not necessarily a natural writer. It’s taken a long time for me to learn the craft. I’m grateful to say that my writing has improved enormously. Writing the first draft is always the hardest part. I especially struggle with writing descriptions. The other big challenge I faced was proofreading. That part became the bane of this project.

What did you enjoy most about writing this book?

I really enjoyed watching this story evolve. I had a detailed outline. However, my characters often had other ideas for how their story should unfold. I was often blown away by the direction in which the characters took this story.

That has to be interacting with the readers, especially those who love the story. I enjoyed hearing from them while they were reading through it. It’s a lot of fun hearing their reaction to the various sections of the story.

Who are some of your favorite authors that you feel were influential in your work?

I’ve met many authors through Facebook and have had a lot of fun interacting with them. Some are prolific writers, and many are just starting out like me. I'm particularly partial to the lesser known authors. They are all exceptional writers, and their stories are wonderful. Here are just a few that I highly recommend.

Ramcy Diek - Storm at Keiser Manor (This is an enduring time-travel story.)

Leila Snow - Leila is a historical fiction author after my own heart. I love her work because she deviates from the same old, same old stories, which are the kind that I write.

Kathleen O'Connor - She writes women's fiction and has published 2 books. Kathleen was a member of my writer's group. I used to love when she read her submissions and her books are wonderful.

Catherine Kullman - She writes Regency romance stories. She has published two books and another one is on its way. The two that are out are both delightful.

Riana Everly - She writes Pride and Prejudice Regency mashups. She recently published a second book; both are great reads.

K.M. Pohlkamp - Also a historical fiction author. Her debut novel, Apricots and Wolfsbane, is a fascinating read about a woman assassin during the Tudor period. I must admit that I was reluctant when I first read this book, but was hooked after the first chapter. All I can say is, wow, what a story!

Dan Strawn - I count Dan as a good friend on FB, and he's a prolific writer. His stories are wonderful.

Have you ever had one character you wanted to go one way with but after the book was done the character was totally different?

Of heavens yes, each character has their own distinct personality. It’s quite common for them to take over their part in the story. Many of my characters grow and evolve. That’s doubly true for my character, Cora Bradley. Cora was supposed to be a minor player, yet she wormed her way into a bigger role and became one of my favorite characters. I liked her because she constantly surprised and inspired me throughout A Maiden’s Honor.

Sarah Campbell is a rarity among women in her time. Raised by her Scottish father and the natives of a remote island in the South Pacific, Sarah and her father embark on a perilous journey to Scotland. Their crew betrays them and murders her father for the purpose of selling Sarah into slavery. She is rescued by an unlikely hero, Hassan Aziz, the most feared pirate on the Barbary Coast. She quickly discovers that she is unprepared for the complex world that is suddenly thrust upon her. Sarah must find a way to survive in a world that intrigues and terrifies her.

“Explain it in a way that she can understand,” Hassan shouted. “I want her to understand your treachery. Tell her now, or I will cut off your ears, your nose, and every part of your body until you confess your sin.” While several of his crewmen held Emile steady, Hassan pressed his saber against the doctor’s ear. “This is your last opportunity to confess,” he warned as he pushed his saber deep enough to draw blood.

Beads of sweat rolled down Emile’s forehead. “I deceived you, Sarah.” His voice quivered as he spoke in English. “We intended to murder your father when we decided to give you passage to France.” 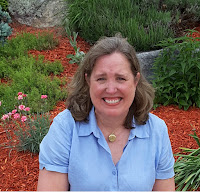 Josanna Thompson is the author of A Maiden's Honor and The Woman from Eden series. She has lived in many different places in the United States, including the Southeast, the Midwest, California, and the Northeast. When she is not writing; she enjoys traveling, exploring, and scuba diving.

Goddess Fish Promotions said…
Thanks for hosting!
5:31 AM

Unknown said…
I enjoyed getting to know your book and thanks for the chance to win :)
10:13 AM

Sorry for my late reply. I just got home from a weekend of sailing in Maine.

Thanks, Lisa and Rita for stopping by and saying hi. You made my day.