This post is part of a virtual book tour organized by Goddess Fish Promotions. The author will be awarding a $20 Amazon or B/N GC to a randomly drawn winner via rafflecopter during the tour. Click on the tour banner to see the other stops on the tour.

"They are immortal, deadly, ruthless. I don’t belong to their dark underworld.

I won’t be a victim. Never again."

She has nothing—not even a roof above her head. She has unimaginable powers, but these powers come at a price: she has to feed on the mental energy of human beings, killing them in the process.

Her name is Griffen and she is a newborn. She is a copy, a paranormal twin of a young woman, Letitia. Griffen is not the only one of her kind—there are others like her, living among humans or hiding underground. Romantics called them doppelgangers, ghostly twins, the harbingers of death. Scientists who know that they exist call them simulacra. They call themselves mirror souls. Who are they and what are their goals?

Lonely and desperate, hunted by her fellow mirror souls, Griffen hides in the London underground and preys on criminals. In this dark underworld, is there a place for compassion, for love?

In this action-packed paranormal thriller, dark fantasy author A. J. Blakemont will guide you on an epic journey through parallel realities toward a dramatic revelation.

My father was an engineer, my mother a botanist. They must have loved each other very much because, honestly, they had little in common. She was a Wiccan; he was a Protestant atheist (I couldn’t explain how that was even possible!).

Father’s office was designed like the cockpit of a spaceship. Each time I borrowed a book or even a pen, I had to return it exactly to the same place. I feared that if I put it elsewhere, an alarm would go off: “Alert, alert, pen number five has been misplaced!” Of course, there was no alarm, which made the room even more frightening. I had the feeling that some artificial intelligence watched my every move.

Mother’s room was the opposite: it resembled more a greenhouse than an office. Plants couldn’t just content themselves with growing from pots; they had to invade every available square inch. If we had stayed in one place for several years, the walls, the furniture, the frames of the windows would have been overgrown with vegetation.

Parents like these could only give birth to a science fiction fan. I still wonder why I didn’t grow up in a Star Trek uniform. However, genetics works in mysterious ways. From my mother, I inherited a taste for chaos, and from my father, a deep distrust of authority (spiritual or otherwise). In other words, I was an unrepentant anarchist.

One day—I was sixteen then—I had a surprise for them. In fact, I was the surprise. My black leather jacket was supposed to symbolize my intellectual independence and, at least in my imagination, was demonstrating my status of freethinker. My hairstyle, on the other hand, should have pleased my mother, as it evoked one of those exotic white flowers she was so fond of. Nevertheless, my getup didn’t send my parents into ecstasies. It did send them into an emotional state, but it wasn’t the emotion I was hoping for. 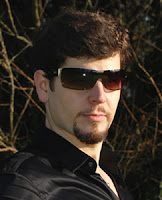 I am a novelist and essayist interested in all things dark and mysterious. My favorite genres are science fiction and fantasy. I am also passionate about music, mythology, and history and its mysteries. I have a degree in literature and a PhD in molecular biology, and I earn a living as a professional writer. I live near London in the UK and I am a member of the Society of Authors.


Links to the books are provided on the author's website and can be bought at Amazon US, Amazon Canada or Amazon UK.

Goddess Fish Promotions said…
Thanks for hosting!
4:37 AM

Unknown said…
Congrats on the tour and thanks for the chance to win :)
6:00 AM

Victoria Alexander said…
Great post! Thanks for sharing and have a great weekend :)
8:25 PM

Bernie Wallace said…
This looks like a fun read. Thanks for sharing and hosting. Bernie W BWallace1980(at)hotmail(d0t)com
8:53 PM

Ally Swanson said…
Congrats on the new book and good luck on the book tour!
2:34 AM

Ally Swanson said…
I have enjoyed following the tour and look forward to checking out this book!
3:06 AM