Win 2 books: Wilde Side by Jannine Gallant and Game of Vengeance by Amanda K. Byrne

This post is part of a virtual book tour organized by Goddess Fish Promotions. The authors will be awarding digital copies of both books on tour to a randomly drawn winner via rafflecopter during the tour. Click on the tour banner to see the other stops on the tour.

The Wilde brothers are addicted to the rush of adventure. But one of them is about to discover that it’s sink or swim, when passion and politics collide…

Whitewater rafting guide Sawyer Wilde has taken his share of inexperienced adventure seekers through the rapids of Idaho’s Salmon River, so his next group should pose no problems—even if it includes a presidential hopeful and his sexy, outspoken aide. After all, it’s just a campaign photo-op for the congressman. Until a series of minor mishaps takes a sinister turn…

Devin Lockhart has one job on the rafting trip: to make her boss look both presidential and relatable. And no matter how distractingly attractive their guide is, she plans to do it well. But as danger stalks them through every bend in the river, Devin must put her life—and the congressman’s—in Sawyer’s capable hands. Because surviving the trip is only the beginning of a deadly ride…

An eye for an eye, blood for blood.

UCLA student Cass Turner was hoping to move on from the family business—but when the business is professional assassination, that’s easier said than done. And sleeping with the man she was supposed to kill only complicates things. Her relationship with Nick Kosta, a lieutenant in LA’s largest crime family, was supposed to be no-strings-attached fun. But if the two of them want to stay alive, they’ll have to keep each other close.

Nick’s traitorous cousin, Isaiah, is out for blood, so Cass can’t afford any distractions as they try to hunt him down. Yet she can’t help puzzling over Nick’s motives—does he really share her deepening feelings or does he just feel responsible for her? And if their relationship is for real, will they even have a future? Because with their enemies several steps ahead of them, one false move could bring disaster for everyone Cass holds dear...and in this game of cat and mouse, no one will leave unscathed.


Enjoy an Excerpt from Wilde Side:

A grin flashed, and he squeezed the hand he still held. “I thought dogs were supposed to resemble their owners. Nothing uncoordinated about you.”

“Good thing, or I wouldn’t have made it across that ledge.” “Yeah, you would have. Anyway, we’ve arrived.”

They rounded a bend, and the vista opened up to majestic splendor. Below them, the Salmon River sliced through an evergreen bowl studded with patches of early fall color, bright nuggets in a sea of green.

Devin drew in a breath. “Beautiful.”

His gaze held steady on her face. “Without a doubt.” He motioned toward a low rock. “Want to sit for a while?”

“Sure.” She dropped down then slid over to make room for him. “Thanks for bringing me up here. The view is worth those few minutes of nail-biting.”

He leaned back, one elbow brushing hers. “I needed a little peace and quiet away from the group.”

“Funny, I was thinking the same thing earlier.”

“Until I busted in on your alone time?” He gave her a sheepish smile. “Sorry about that.”

“I’m not. You’re restful to be around. Not a lot of chatter. No drama. No whining.”

His grin sent a flutter through her chest before his expression sobered. “You’re the opposite of restful.”

He nodded then ran a finger down the length of her arm. “When I’m around you, I spend most of my time thinking about only one thing.”

The heat in his eyes stole her breath. Her response was a mere whisper. “What do you think about?” 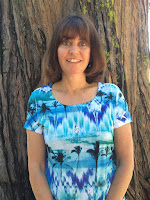 Write what you know. Jannine Gallant has taken this advice to heart, creating characters from small towns and plots that unfold in the great outdoors. She grew up in a tiny Northern California town and currently lives in beautiful Lake Tahoe with her husband and two daughters. When she isn’t busy writing or being a full time mom, Jannine hikes or snowshoes in the woods around her home. Whether she’s writing contemporary, historical or romantic suspense, Jannine brings the beauty of nature to her stories

When she’s not plotting ways to sneak her latest shoe purchase past her partner, Amanda Byrne writes sexy, snarky romance and urban fantasy. She likes her heroines smart and unafraid to make mistakes, and her heroes strong enough to take them on. Amanda lives in the beautiful Pacific Northwest, and no, it really doesn’t rain that much.

Bea LaRocca said…
Quite a combo! These both sound like great reads. Thanks so much for sharing the excerpt and author bios!
9:26 PM