Win a book: Veiled in Blue by Lynne Connolly & Within a Captain's Fate by Lisa A. Olech - Spotlight and Giveaway

This post is part of a virtual book tour organized by Goddess Fish Promotions. Lisa Olech and Lynne Connolly will be awarding a digital copy of the book to a randomly drawn winner via rafflecopter during the tour. Click on the tour banner to see the other stops on the tour.

WITHIN A CAPTAIN’S FATE by Lisa Olech

Guided by the winds of fate, Henry ‘Ric’ Robbins arrives on a hot June day in Port Royal. But the moment he sets foot on what should be a pirate’s paradise, he’s driven to steal a woman destined for slavery, survives the worst natural disaster to ever hit the isle of Jamaica, and answers the call to be captain of the Scarlet Night.

Jocelyn Beauchamp’s life is one of privilege—until she is rudely thrown into the hands of pirates. Freed from the chains of her cloistered society, Jocelyn is drawn to her newfound life at sea—reckless, thrilling, and utterly unpredictable. And the man who saved her life not once, but twice—why not do it all over again?

VEILED IN BLUE by Lynne Connolly

Governess Eve Merton would have fallen into serious trouble on her walk home if a handsome stranger had not stopped to help her. But when Mr. Vernon gives her a lift on his horse, he makes no secret of his attraction. As a well brought-up young lady, Eve does her best not to notice, but when he sets about courting her, she knows she’s in trouble. For she has a secret: she is the daughter of a deposed king, which means not only is she without a dowry, but also that her life is in danger…

Little does Eve know that Mr. Vernon has secrets of his own. In truth, his name is Julius, Lord Winterton, and he’s well aware that Eve is the offspring of the Old Pretender. In order to save his sister, he must convince Eve to wed—though he wants nothing to do with love. But as the two grow closer and an attempt is made on Eve’s life, Julius may realize that fighting his heart’s true desire is a battle most pleasurably surrendered…


Enjoy an Excerpt from Veiled in Blue:

He swung from the saddle and reached for her. The horse was too weary to take advantage of his lightened load and stood patiently while Mr. Vernon slid his hands around her waist and lifted her effortlessly to the ground. He did not release her immediately.

Eve held the empty basket like a shield, the only protection she had against more intimate contact.

He smiled down at her. He was half a foot taller than her, if not more. “Do you think you can take your own weight, or should I carry you to your door?”

“Sir!” Scandalized, she opened her eyes wider while heat rushed to her cheeks. The notion of all the residents of the green watching while he picked her up was unthinkable. Or almost. The small part remaining was her romantic self, the part she ruthlessly crushed. It lingered this time to whisper, What if I let him? in the dark recesses of her mind.

Showing nothing but polite gratitude, she thanked him kindly. “I daresay you will be away in a few days, so I doubt we will meet again. So allow me to thank you now. I am deeply grateful for your help, sir.”

Now, looking directly at him, she sensed danger lurking in the clean-cut features. This man had a wild edge, well concealed but there. Intelligence gleamed in his eyes, together with the wry humor he had displayed during their journey. For one reckless moment, she thought he might tighten his hold, force her to drop the basket, and kiss her. His lips were full, eminently kissable. Not that she had much experience.

Lisa A. Olech is an artist/writer living in her dream house nestled among the lakes in New England. She loves getting lost in a steamy book, finding the perfect pair of sexy shoes, and hearing the laughter of her men. Being an estrogen island in a sea of testosterone makes her queen. She believes in ghosts, silver linings, the power of a man in a tuxedo, and happy endings. 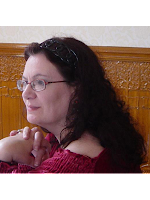 I was born in Leicester, England, and lived in our cobbler’s shop with my parents and sister. It was an old house and most definitely haunted, but I didn’t find out until I left that my great uncle had hung himself in the living room! But I think our ghost might have been older than that. It was built on the site of the old Roman cemetery, and the land had been constantly inhabited, being in the centre of town. Then, when the council bought the house from us to build a road, my grandfather retired and my father went and worked for the Post Office. My mother was a sample machinist; that is, she worked with designers on the prototypes (models or samples) of garments. So I was very well dressed! We bought a relatively modern house in the country, and my mother was blissfully happy. It’s all very well living in a large old house, but it’s a dreadful task to keep it clean and warm!

My mother's side of the family are Romany gypsies, although sadly we haven't any of the old trailers that are so astonishingly beautiful. I was taught to read the Tarot cards, and I usually use two packs; the Rider pack for simple readings and the Crowley Thoth pack for the complex stuff. I've always had an interest in the paranormal and it's been a delight to be able to put some of this into my novels.


Buy Within a Captain's Fate at Amazon, iBooks, Google, Kobo, or Barnes and Noble.

Buy Veiled in Blue at Amazon, iBooks, Google, Kobo, or Barnes and Noble.

Goddess Fish Promotions said…
Thanks for hosting!
6:12 AM

Lisa A. Olech said…
Thanks so much for having me here today!! I'm in great company with Lynne Connolly!!
9:15 AM