This post is part of a virtual book tour organized by Goddess Fish Promotions. James will be awarding a $10 Amazon or B/N GC to a randomly drawn winner via rafflecopter during the tour. Click on the tour banner to see the other stops on the tour. 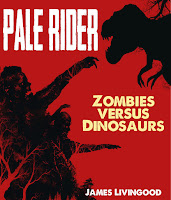 Two worlds collide in this action novelette. Zombies have destroyed civilization. Gasoline fuel is no longer an option, but humanity must find a way to survive. In response to trying to restore our way of life, we engineer franken-monsters. Because of their small brains and massive sizes, these beasts make quick work of farming and clearing land. These large creatures are immune to the zombie virus and perform excellently in loud conditions. They are easy to train. They behave like war horses, prone to help charge in and defend our livelihood.

Blues often hunt for weaker and sick humans. Standing your ground and appearing strong will scare off blues. In the beginning, we had become so used to being the top of the food chain, that the thought of being hunted was frightening. Most of the population ran, and that led to massive feasts. Furthermore, our distaste for mandatory physicals meant pockets of blues formed. Gun owners and others brazen enough to stand their ground often kept their ground. Yet, as humans became replaced, the blue’s tactics became more complex. Soon, only standing your ground with a gun was not enough. The practice still works in isolated regions, but the best escape from a blue is to retreat to a safe city.

New Eye City was formed for just that reason. Survivalists knew how to build flash communities, which would then focus on walls. As many of you know, gasoline fuel was no longer an option as the infrastructure collapsed around humanity. Cars, trucks, and farming equipment gathered rust from disuse. Humanity needed a new approach to surviving. 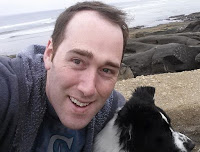 James was born in Montana, raised with three brothers, and provided trouble for two parents. In his 20's he fell in love with the Pacific Northwest. He then moved out to Seattle after college and started a life. In 2014, he started to write full time.


The book is currently FREE on Amazon.

Goddess Fish Promotions said…
Thank you for hosting
5:52 AM