High school is torture for Steven Walthurst, and home isn’t a whole lot better. The only place that offers respite is an abandoned tree house at the edge of town. But something lurks in the nearby woods, and the long line of elm trees has a clear message for Steven: keep out.

Then one day, Steven finds a little girl lying unconscious, perilously close to the woods. As the two get to know one another, Steven experiences real friendship for the first time—and gets closer than ever to knowing the darkness that skulks between the trees.

He dedicates himself to keeping his new friend safe, but the tranquility of their fragile hidden world doesn’t last long. When an act of cruelty pushes Steven to his limits, his secrets—and those of the dark woods—come close to unraveling, threatening to destroy the one thing making his teenage life bearable. Can Steven save everything he’s built from crumbling under the pressure?

When Steven reached the bottom of the tree, he crossed the clearing slowly, keeping an eye on the woods. Right at the edge of the creek, he stopped and looked around. The trees swayed in the wind as they always did. Steven shuddered. He wouldn’t be able to enter the woods without crossing the creek. He took a deep breath and slid himself down the bank, careful not to slip on the rocks. He chose the shallowest section of the creek and crossed it in two big leaps. His shoes got a little wet, but he wasn’t too concerned. What bothered him was his proximity to the woods. If his momma’s spy reached a hand out from behind the tree in front of him, he could easily grab Steven by the front of his shirt, and that would be the end of him.

He stood watching the tree line and the darkness beyond for a few minutes. All this chivalry had made his throat dry. He pulled out his water bottle from the side pocket of his backpack and as he took a huge gulp, he noticed a pair of red dots in the woods. Steven’s heartbeat sped up and his armpits grew sticky and wet. His forehead leaked sweat and he wiped it with a shoulder, sliding the water bottle back into his backpack.

He didn’t take his eyes off the two ominous dots. But when the bright red dots blinked in the dark, Steven screamed, turned around, and ran. He stopped screaming when he had crossed the broken bridge, but he didn’t stop running until he was at Sandy’s front door. Sweat coated every inch of his skin when he pressed the doorbell, panting and holding his knees. A minute later, a slim young woman opened the door. She had a big smile and red lips, and wore a black uniform. Her skin looked flawless under an inch of makeup. It had to be Nanny Gwen.

“Hello. Can I help you?” she asked Steven kindly.

“Hi, my name is Steven. I’m Sandy’s friend. May I see her, please?” he asked, still gasping for air.

“Of course. Why don’t you come inside while I get her?” Another pretty smile before she turned around.

“Thank you, ma’am,” he said and stepped inside a vast hall decorated in Victorian style. The air inside was cool and smelled like lavender. Pictures of Sandy, her parents, and grandparents lined the wall in thick, rich frames. A minute later, she came running down the winding stairs, her hand sliding along the wooden banister, and he was relieved. 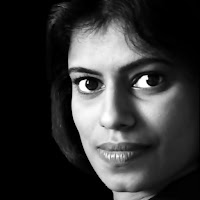 Rosemary Anthony writes suspense fiction with a twist. She has a Bachelor’s degree in Management from the University of Science Malaysia and recently made the jump from writing official documents to writing fiction novels. Blessed with 17 nephews and nieces, she finds the world of young adults to be a thrilling source of inspiration for her books.

Rosemary lives in a small town in Malaysia and travels as often as possible to broaden her cultural horizon.

James Robert said…
I'm back, hope you're not too tired of hearing from me. Thanks again for this opportunity to win and have a terrific day!
11:33 AM

desitheblonde said…
i can sy never of weird ttitle but it w ould draw me to it for sure
4:07 PM