This post is part of a virtual book tour organized by Goddess Fish Promotions. Rebecca Bryan will be awarding a $20 Amazon/BN GC to a randomly drawn winner via rafflecopter during the tour. Click on the tour banner to see the other stops on the tour.

Upon learning she is the only living beneficiary of a late aunt's estate on far away Mackinac Island, Elle Curtis finds an unusual array of items connected to 19th Century writer Constance Fenimore Woolson—a discovery that will lead her on a journey and change her forever.

Looking around at the throng of tourists, Elle wondered how she would recognize Jace, the lawyer handling Lois’ estate. He had promised to be at the dock to pick her up and take her to her hotel as he had made all the arrangements for her stay. She hated to admit it, but she had begun to think the man on the other end of the phone sounded handsome, not that it mattered. He was probably married with children and she shouldn’t be looking anyway.

When she saw a man a few feet away holding the second sign of the day with her name on it, she was secretly pleased to see sandy brown hair, dark blue eyes, and soft lips. His charming and somewhat familiar voice was a welcomed relief.

“You must be Elle,” he said when she had made her way through the crowd to him. He had an air of confidence that was rather intimidating yet pleasant all at once. “Jace Stokes. How was your trip?”

She rubbed her lips together, wishing she’d combed her hair and put on some lip-gloss before she’d gotten off the ferry, but it was too late now. “It was interesting. I haven’t traveled in a long time.” Would this justify her looking rather weathered? she wondered.

“Are you cold?” he asked, acknowledging her parka- like hoodie. That’s when she noticed he was wearing khaki shorts and a button down, short sleeve Hawaiian shirt. She pulled the hoodie back and ran her fingers through her tangled tresses. “It was a bit breezy on the boat.”

“Florida blood.” He smiled like it was an inside joke. She unzipped her jacket and worked her fingers through the knots as she followed him out of the gate and into the street.

Mackinac Island (sounded out ‘Mackinaw’ as Jace had explained) was filled with people, carriages, bicyclists, and ringing bells. There was not, however, one single car on the street. It was like she’d traveled back in time.

Jace seemed to sense her shock when he said, “No motorized vehicles are allowed on the island.”

“None?” She stared at the row of whinnying horses. A maroon carriage with The Grand, stenciled in gold paint sat near the entrance. Jace handed the driver Elle’s suitcase.

“It’ll be waiting for you in your room. In the meantime I thought we’d get something to eat and then I’d show you the house. Is that alright?”

She nodded. She hadn’t eaten since Detroit and since she’d pretty much ran a 5k to catch her flight she was starving. She followed Jace down the boardwalk, glad to see a man who thought like she did – through her stomach first.

Main Street looked and felt like a movie or a beautiful coastal getaway or Disneyland or home. The clapboard building fronts were crisp and white, the trims painted in blues, reds, or yellows. Colorful purple petunias, orange gingersnaps, and white alyssum hung from baskets along the boardwalk, filling the air with a sweet honey fragrance. While bees buzzed hungrily from container to container, shop owners swept the sidewalk and waved to the tourists as they passed on their way to the beach or the ice cream shop. Again, similar to St. Augustine. The two cities could have been related.

Horse drawn carriages clopped along in a syncopated rhythm. It felt like a simpler time, one people craved as evidenced by the large crowds enjoying the thousands of blooming lilac trees dotting the hillsides, their sweet fragrance permeating the air and making everything look and smell like a picture book. 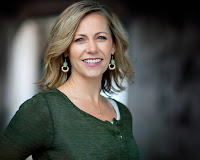 Rebecca started writing one summer day in 2008 to escape from the stresses of life, never imagining she actually publish one day. Becoming Fenimore is her third novel. Her previous novels, The Sand Bar, 2012 and Far From Perfect, 2013 were runners up on Readers Favorites, in the category of women’s fiction.

In a previous life Rebecca graduated from Brigham Young University-Idaho in Interior Design. When she is not writing or taking care of her five children, she can be found working in the theater and has been known to do a commercial or two on the side.

Unknown said…
I am looking forward to reading more of the book. Thank you for sharing.
10:47 PM