Win a $20 GC - The Crooked City by Ryan Whitwam

This post is part of a virtual book tour organized by Goddess Fish Promotions. Ryan Whitwam will be awarding a $20 Amazon/BN gift card to a randomly drawn winner via rafflecopter during the tour. Click on the tour banner to see the other stops on the tour.

Jonah doesn’t want to run–he has to. There’s only so much pain one man can cause before he needs to start over. Unstuck from his tainted past, he craves the anonymity he can only achieve by vanishing like a specter in the night.

Before his new life is even underway, a chance encounter leaves him in possession of a curious object–something the mysterious Keepers of The Oracle will kill to obtain, but there’s more to the Keepers than Jonah could possibly imagine. They have the ability to do much worse than kill, and now he's in their sights.

The Keepers wield power unlike anything Jonah has ever seen, and they’re closing in fast. He’s placed a new group of innocents in danger this time, and he can’t run away again.

Kyle’s gaze was empty—his eyes shifted seemingly at random. He pulled at his restraints with renewed vigor, his body contorting and flexing to its limits. Blood flowed from Kyle's wrists and ankles as he tore his flesh, attempting to escape the cuffs. He glowered at the well-dressed man as a mad shriek resolved itself into a growl.

Jonah's breath came faster, his heart pumping louder. The man on the other side of the window, a man who looked disturbingly like himself, was no longer human. The anger bubbled out of him in the way he moved, and with the hideous screams.

He backed away, desperate to get as far from the viewport as possible. Ollie tightened his grip and pushed him back into place. Spring sidled up, grabbed Jonah by the back of the neck, and squeezed tightly. Spring held him facing forward, looking toward Kyle.

The well-dressed man dropped something on the smooth concrete floor. The clattering echoed through the barren room. When the object came to rest, there was no mistaking the shape of a knife. It was long and covered with cruel, serrated edges. After straightening his tie, the man left through the single door.

The clasps holding Kyle to the metal chair suddenly disengaged and he fell forward. Kyle brought his hands to his head and gathered himself into the fetal position, painful screeches still pouring out of him.

Kyle drew himself up a moment later and saw the knife lying on the floor. He pulled himself to it on his hands and knees, leaving a trail of blood from his wounds as he slid along. Kyle's trembling hands found the handle. He grasped it in his left hand, his knuckles turning white with the strength of his grip.

The wailing lessened and was replaced by heavy breathing and moaning. The man’s eyes looked cold and lifeless, pinned straight ahead. Kyle bent forward on his knees and hugged the knife to his chest as he rocked back and forth. Then he spread his arms wide.

There was a dull thump as Kyle buried the knife up to the hilt in his chest. He pulled the implement out and held it back out at arm's length, then plunged it into his chest again. The hollow sound of the impact with his ribcage reverberated in the empty room.

Kyle withdrew the blade and placed it on the left side of his stomach. He drew the blade across his midsection, a cherry-red streak following it. Thick blood and other less-identifiable fluids poured out. He managed one more jab in the gut before he fell forward with his bowels spilling out on the floor.

Jonah shook as the blood spread out across the concrete. Mr. Spring still held him firm, forcing him to look upon the fresh corpse. Kyle’s body twitched. Jonah's shoulders hunched forward, and he suppressed a gag. 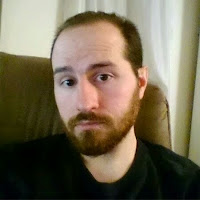 Ryan lives in Minnesota with his wife and dogs. He writes words like the ones in this book, as well as some very different words on the internet about technology and science. He likes smartphones, sci-fi, and people who read his book. He's not very good at describing himself.

Buy the book at Google Play or Amazon

Anonymous said…
What kind of books do you like to read?
9:35 AM

Stormy Vixen said…
Enjoyed the excerpt, sounds like a really good book, thanks for sharing!
2:02 PM

MomJane said…
What an exciting excerpt. This sounds like a great book.
2:06 PM

Unknown said…
Thanks for the post. I'm around at all the above channels if anyone wants to chat.
3:33 PM

Unknown said…
Love the excerpt! Can't wait to read this book!! Ugh I have so many books I want to read now! lol
2:01 AM