Win a $10 GC - Book Blast: A Reaper of Stone by Mark Gelineau and Joe King

This post is part of a virtual book tour organized by Goddess Fish Promotions. The authors will be awarding a $10 Amazon/BN GC to a randomly drawn commenter. Click on the tour banner to see the other stops on the tour. NOTE: The book is FREE on Amazon for five days, starting today. 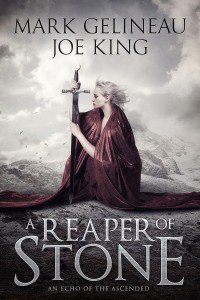 A Lady is dead. Her noble line ended. And the King’s Reaper has come to reclaim her land and her home. In the marches of Aedaron, only one thing is for certain. All keeps of the old world must fall.

Elinor struggles to find her place in the new world. She once dreamed of great things. Of becoming a hero in the ways of the old world. But now she is a Reaper. And her duty is clear. Destroy the old. Herald the new.

The girl put a hand on his shoulder. Her voice was low. “Whatever happens next. You mustn’t move.”

And then the ground underneath the horse exploded upward and a pale white form the size of a wagon erupted into the air. The horse let out a scream that turned into a wet gurgle as white writhing tentacles enveloped the animal. The copper tang of blood filled the air and Conbert felt his stomach lurch.

He thought to go for the sword he carried at his side but he saw the girl’s eyes.

He held himself still as another of the creatures breached the drowning grass. It was a huge mass of rippling white flesh, except at the front where the mouth opened like an exposed wound. Massive tearing fangs lined the pink maw, and white tentacles writhed from the worm's throat, seeking the remnants of the thrashing horse. The two monsters tore the horse apart in seconds, powerful tentacles flaying meat from bone with horrific efficiency.

As the rendworms began to slide across the ground in their direction, Con felt a terror urging him to run. He fought against it, trying to focus instead on the perfect stillness of the young girl. The huge worms slid past them.

And then as Con held his breath, the girl moved.

The young cadet was fast and sure as she darted forward. She struck out with the mace, swinging it with both hands, and smashing it into the rendworm’s side. There was a loud crack, and Con knew that somewhere inside the sinuous horror a bone had broken under the blow.

About the Authors: Mark and Joe have been writing and telling stories together for the last 25 years. They share a love for the classic fantasy tales of their childhood. Their Echoes of the Ascended series brings those old epic characters and worlds to new life.

Get the book for FREE at Amazon.

Goddess Fish Promotions said…
Thanks for hosting!
7:08 AM