When we were searching for apartments in Istanbul, I insisted we have three bedrooms so that I could have my very own writing space. While living in Germany, my writing space was the office of my Bed & Breakfast, which was a tiny room and open to the B&B guests at all times. (Okay sometimes I shut the door and pretended I wasn’t in there to get some writing done) It wasn’t very inspirational especially at breakfast time when guests kept asking how to use the coffee machine!

I hit the jackpot with our apartment in Istanbul. Not only do I have my own office but I have several floor-to-ceilings windows and a balcony. On these hot summer days I open the balcony door and enjoy the cool breeze and the smell of the sea. The sounds are less enjoyable (think traffic, brakes squealing and lots of honking) but luckily I’m an early bird and the Turkish are definitely not early risers. 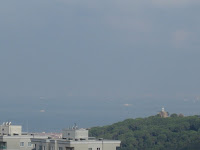 I have fabulous views from my office chair. Basically, I have three views I like to check out. First and foremost is the sea. I took the picture early in the morning so it might not be clear but not only can I see Europe from my window but also boats upon boats lined up to go through the Straits. 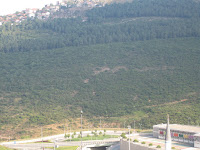 If I turn my head slightly more to the right, I can see the big hill across the street. This is a really special view as there’s not much green in Istanbul. There are tons of stray dogs in the area and I often see them running around the hill – wild and free. I like to imagine they’re having a ball.

The last view I like to look at is the tennis court. I’m a major tennis addict and play as much as I can – which is never often enough. I can see just enough of the court to wish I was playing. Sometimes it’s hard to turn myself away from these awesome views back to my laptop.

We’re leaving Istanbul in November and there honestly won’t be much I miss about the city itself, but I will most definitely miss the early morning view of the sun rising while I’m typing away listening to the sea birds squawk.

Everything seems to be going well in Jack’s life. His store is busy making money hand over fist and his best friend has found love. The new bookkeeper at the store discovers things aren’t actually as they seem. Someone is playing fast and loose with the store accounts. Jack’s bestie and his knitting group fancy themselves detectives and jump at the chance to solve Jack’s problems. When they aren’t re-enacting scenes from Mission: Impossible, they’re setting Jack up on dates and generally insinuating themselves into his love life. They’re determined to find love for Jack as well as his missing money. Will Jack catch a thief or find love? Either way Jack’s going to get his man.

The first candidate arrived promptly at 9:30 or at least his mom did. Danny ushered an elderly lady with a stern bun into Jack’s office and made a hasty retreat.

Jack just stared at her until Izzy cleared her throat and poked him in the ribs. “I’m sorry,” she said when Jack kept staring. “We were expecting someone named Fred. Is that you?”

The woman looked first at Jack and then at Izzy. “Of course that’s not me,” she snapped. “What kind of name is Fred for a woman?”

The woman rolled her eyes and harrumphed. “He’s in the bathroom. He always gets nervous at interviews.”

“Um. Okay,” Izzy was quick to respond when she saw Jack opening his mouth. Knowing Jack nothing appropriate was coming out of his mouth at the moment. “Can you have a seat outside while we conduct the interview?” Izzy could do prim and proper when necessary.

The woman gave Izzy the evil eye before turning on her heel and walking out. They never saw Fred.

Jack was licking his fingers when Danny ushered in the next candidate. “Hi!,” the enthusiastic candidate nearly shouted. “I’m Tim!” That part was definitely shouted.

Jack and Izzy stood to shake the man’s hand. He swayed a bit as he leaned forward. Jack took a sniff, but didn’t smell anything untoward. Tim collapsed in his seat while Jack stared at his hand in disgust. Tim’s hands were sweaty. Jack’s mouth pulled tight in a grimace and his nose scrunched in disgust.

“So Tim. Why do you want this job?” Izzy’s voice was overly enthusiastic in an attempt to bring Tim’s attention to her so he wouldn’t see Jack’s grimace. She need not have bothered. Tim had leaned back in the chair and closed his eyes. When he didn’t respond, Izzy snapped her fingers. “Tim?”

“Have you been drinking?” Jack didn’t even bother to ask in a polite manner.

Tim shrugged. “Just a tiny drink to settle my nerves.”

Jack stood. “Okay. Thanks a lot for coming. We’ll be in touch.”

Tim looked confused but managed to struggle to his feet and lurch out of the door. Izzy was giggling uncontrollably by the time Jack sat back down. He snorted. “At least this isn’t boring.”

About the Author:I was born and raised in Wisconsin, but think I’m a European. After spending my senior year of high school in Germany, I developed a bad case of wanderlust that is yet to be cured. My flying Dutch husband and I have lived in Ohio, Virginia, the Netherlands, Germany and now Istanbul. We still haven’t decided if we want to settle down somewhere – let alone where. Although I’ve been a military policewoman, a commercial lawyer, and a B&B owner, I think with writing I may have finally figured out what I want to be when I grow up. That’s assuming I ever grow up, of course. Between tennis, running, traveling, singing off tune, drinking entirely too many adult beverages, and reading books like they are going out of style, I write articles for a local expat magazine and various websites, review other indie authors’ books, write a blog about whatever comes to mind and am working on my sixth book.

Goddess Fish Promotions said…
Thanks for hosting!
4:28 AM

D.E. Haggerty said…
Thanks for hosting my blog tour today. This was a great idea! I enjoyed writing it
10:35 AM

Victoria Alexander said…
Awesome views! I'd love to look out the window and see all that green :).. thanks for sharing!
11:27 AM

Unknown said…
I thoroughly enjoyed reading 'The Writer's View'. How lucky you are to be able to explore the world. Thank you!
8:52 PM

Patrick Siu said…
I have enjoyed learning about the book. Thanks for sharing it.
2:15 PM