The Writer's View
Hi, and thank you for inviting me to post on your blog! Interesting question! I’d like to talk about the view inside my writing space. 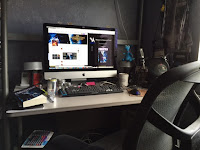 I live with my spouse and our small herd of cats in a four-bedroom house, so I have my own office room where I do most of my writing. Much as I love the cats, sometimes I need to get away from them so I can think! As you can see in the picture, I like to be surrounded by fun stuff—I’ve got action figures, old convention badges, stuffed toys, cups, my ever-present can of Diet Coke, story notes, and a bunch of other things that I should probably clean up (like the ancient iPod and at least one of the microphones). I tend to get a bit cluttered if I’m not careful, and every once in a while I just have to swoop through and clean up or it starts to drive me a little crazy. At least it’s not covered in drifts of cat hair!

One odd thing about me is that I can’t write well unless I’m comfortable. I’ve seen plenty of people who can write with a laptop on their lap while sitting on a couch, or twisted sideways with their monitor off to the far side of their desk: I envy that, but I can’t do it. I need a comfortable chair, a good surface, a big monitor, and full-sized keyboard. I can write on a laptop if I’m away from home and have no other alternative, but I don’t like it and I don’t feel like I do my best work there. That’s probably why I rarely get much writing done when I’m on vacation.

I have an auxiliary writing space downstairs: my Mac is in my office, and my Windows machine is on a desk downstairs in what used to be the dining area. This is where I used to do most of my work until I finally got tired of my office being an overgrown storage room and shoveled it out! I still use the PC when I want to be more social with the cats and the spouse, when I need to do formatting, and when I’m just generally not feeling like shutting myself up in a room. I transfer my work back and forth between the two via email. So far, this setup has worked out very well for me.

Dr. Alastair Stone, Occult Studies professor, powerful mage, and snarky British expat now based in Palo Alto, California, does his best to keep his academic and social lives separate from his increasingly frequent brushes with various malevolent forces from the supernatural side of the street. A little horror, a little humor, but mostly straight-up urban fantasy. 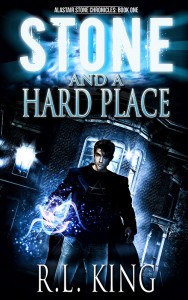 Stone and a Hard Place

Dr. Alastair Stone, Occult Studies professor and powerful mage, has his hands full trying to keep the two sides of his life separate as he trains a new apprentice, deals with a malevolent entity trapped in the basement of a wealthy old woman's massive home, and battles dark mages intent on enslaving it for their own ends. 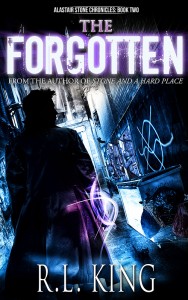 Dr. Alastair Stone is back, this time teaming up with Jason Thayer, a young man hunting for his missing sister. Embroiled in a web of odd homeless people, a growing conspiracy, and deadly danger, they soon realize that even if they find Jason's sister, they might not be able to help her.

What do you do when you discover an extradimensional plot that threatens the safety of the entire world, but you can't tell anyone about it because literally anyone on Earth could be part of it?

Enjoy an excerpt from The Forgotten:

“I had a bad dream,” she said, head buried in Stripey’s neck. It was hard for Stone to make out what she said; he tuned out everything in the room except the little girl in front of him.

“I see…” he said softly. “I have those sometimes, too. What sort of bad dream was it?”

“I don’t know.” She sniffled. “I got up to go to the bafroom. I had to pee.” At that point, she began to shake. “Then I don’t ’member anything until…until…”

“It’s all right,” he said. “Take your time.” Her aura was a mess now, the dark spots rising up to nearly blot out the normal gold. Clearly, her thoughts were agitating her. Behind her, Barnett started to rise from his chair, but Stone waved him back down.

Madison pulled in a deep, shuddering breath and met his eyes. “I…I was standing next to Mommy’s bed. She had something in her eye. There was…blood.” Without warning, she leaped from her chair, flinging Stripey aside and launching herself into Stone’s lap. Her back shook as she dissolved into tears.

Stone, startled, for a moment did nothing. He glanced up at Barnett (help me!) and hesitantly put his arms around the little girl, feeling her wracking sobs. “Shh…” he whispered. “It’s all right…” Of course it’s not all right. You murdered your mother and you don’t even remember it. How can anything ever be all right for you again?

About the Author: R. L. King is an award-winning author and game freelancer for Catalyst Game Labs, publisher of the popular roleplaying game Shadowrun. She has contributed fiction and game material to numerous sourcebooks, as well as one full-length adventure, "On the Run," included as part of the 2012 Origins-Award-winning "Runners' Toolkit."

Her first novel in the Shadowrun universe, Borrowed Time, was published in May 2015.

When not doing her best to make life difficult for her characters, King is a software technical writer for a large Silicon Valley database company. In her spare time (hah!) she enjoys hanging out with her very understanding spouse and her small herd of cats, watching way too much Doctor Who, and attending conventions when she can. She is an active member of the Horror Writers' Association and the Science Fiction and Fantasy Writers of America, and a member of the International Association of Media Tie-in Writers.

Buy Stone and a Hard Place (book 1) and The Forgotten (Book 2) at Amazon.

Goddess Fish Promotions said…
Thanks for hosting!
6:57 AM

Jennifer Tar Heel Reader said…
Great excerpt! I also love that the author has a small herd of cats!
8:07 AM

Anonymous said…
Fun to hear about your writing space!

Patrick Siu said…
I have enjoyed learning about the book. Thanks for sharing it.
2:35 PM

Stormy Vixen said…
I enjoyed the writer's view, sounds like a great book, thanks for sharing!
4:57 PM

Sildarath said…
Thanks so much for hosting! Sorry I took so long to post--been at a convention all day.
R L King
8:55 PM

Unknown said…
I enjoyed "The Writer's View"~thank you for sharing! Get comfortable and write!
9:11 PM

Unknown said…
Exceptional post~thank you for sharing!
10:08 AM

Unknown said…
Thx for sharing & for the giveaway too!
4:52 AM

Unknown said…
Great excerpt~This sounds like a real page-turner!Thank you for sharing!
5:46 PM

kimberly said…
Thanks for the giveaway.
9:50 PM