Win a $40 Amazon/BN GC: The Truth About Lilly by Christy McKee

This post is part of a virtual book tour organized by Goddess Fish Promotions. Christy will be awarding a $40 Amazon or B/N GC to a randomly drawn winner via rafflecopter during the tour. Click on the tour banner to see the other stops on the tour.

Lilly Talbot never imagined she would be starting her life over again. Losing her good name for something she didn’t do has driven her to move into an old lake house she inherited in Vermont. Upon arrival, she is shocked. Half the roof is about to slide into Lake Champlain. Even more upsetting, the man who can fix it will only agree if she trades him room and board for his labor. What will the good people of Haley think of her sharing a house with the handsome bachelor?

A man with a past…

Connor “Mac” McQueen, once one of the infamous Whiz Kids of Wall Street, spent three years in prison for insider trading. Only one thing sustained him during his time inside, the thought of owning Point Cottage, a home he’d fallen in love with years ago. He plans to turn the house into a stunning showcase for his eco-friendly home construction business.

Now someone’s trying to drive Lilly from her home. Is it someone from her past? Mac has secrets of his own-- that could ruin lives if revealed. But if Lilly and Mac are to have a future together they must first delve into the past for answers and accept some difficult truths about each other. Only then, will they know if true love is in their hearts.

"Looks like an artist lives here." He sidestepped and entered the room, looking directly at the Mary Cassatt. "She's one of my mom's favorites. I've seen this one at the Metropolitan Museum."

That was unexpected. She hadn't pictured the big rugged male as an art lover. Almost shaking her head, Lilly cautioned herself to stop making snap judgments about people.

"I'd planned on tearing off all of the old shingles today and begin installing the new tomorrow," Mac said. "But there is considerably more wood rot than I'd anticipated. It's not unusual with these old houses. It's only going to push us back a day or so." His eyes swept over her walls, taking in everything. "If you've got a minute, I'd like you to pick out your shingles."

"I'll bring the samples out to the back yard." He preceded her down the stairs.

Lilly went out the back porch door and walked over to the picnic table. She sat down facing the house, barely aware of the willows rustling overhead and the buzz of jet skis skimming the water. Mac's men were scattered all over the roof like spiders scuttling back and forth, tearing off shingles and prying up wood planks, dropping them over the side. Scott's job was to pick up the scraps and take them around to the dumpster.

Mac circled behind her and sat down beside her, almost touching. His big body radiated such unexpected heat. It was like a magnet, and she wanted to lean closer just to feel his warmth against her. He was a powerful male, and she couldn't pretend she wasn't drawn to his strength and raw masculinity.

"Lilly?" Mac stopped talking and looked at her.

"Oh, sorry," she said. Good lord, girl. Quit obsessing over the first available male you've seen in two years, and get it together.

"Everything I install or use in my new home construction is energy-efficient."

Forcing her attention back to roofing shingles, she turned to a creamy white with charcoal flecks. "I love this color and think it would look good with the gray siding."

"Light-colored roofs like you see in Georgia, the Carolinas and Florida are good for reflecting heat and save on cooling during the warmer months. Up here we use dark colors because they absorb heat and that saves on heating costs in our tough winters." He opened another book to a medium charcoal with some tiny white and silver flecks that gave off a little shimmer. "What about this one?"

She had to admit his color choice offered a rich contrast to the clapboard siding. Not willing to accept his suggestion without looking at all of the other dark choices, she went through the rest of the samples. When she'd checked them all out, she agreed with his suggestion. "Ok, I'll go with the charcoal with the flecks."

"Good choice." He closed the book and turned towards her. "The warranty on these shingles is fifty years and the labor is for twenty-five."

"Why twenty-five?" she asked. "Why not fifty like the shingles?"

He chuckled—a deep purely masculine sound that reached all the way down inside her and warmed her right up. "Because I'm not that far from forty and I don't think I'm going to be going up on roofs after sixty-five." He smiled right into her eyes. "That a problem for you? Me being close to forty?"

Sweet Jesus. Was this man flirting with her? His closeness made her nervous, and it had been a very long time since any man had affected her nerves. The best she could manage was a moderately defensive "no."

"Good to know." He winked at her. "See you later." He stood and walked off towards the house.

Lilly certainly didn't have a problem with his age. It was his larger than life masculine presence that put her on edge. She wasn't accustomed to being around men who were so well endowed—at least in terms of powerful muscles and brawn. Simply sitting beside the man, not even touching, drove her heart rate up. Admittedly, it was not an unpleasant sensation but a little disconcerting. When you'd existed in a sexual wasteland for almost three years, any unexpected titillation would seem overwhelming—wouldn't it? 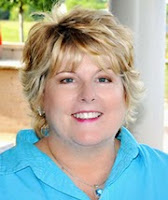 Christy McKee began her career in TV news and eventually found her way into advertising and finally fiction. She believes a good story should be about characters who win your heart, sometimes move you to tears and occasionally make you laugh. As a reader, Christy hopes you'll be swept into her characters' lives enjoy getting to know them, experience the challenges they endure and be with them when they come out on the other side.

Karen H said…
I enjoyed reading the excerpt today.
9:53 AM

Christy McKee said…
Thank you so much for having me as your guest today. I apologize for not posting sooner but we are on an island in South Carolina and had internet problems today.

Christy McKee said…
Hi Rita & Karen, thanks for stopping by for another taste of Lilly and Mac's story. Hope to see you back tomorrow.

Anonymous said…
I enjoyed the excerpt!