This post is part of a virtual book tour organized by Goddess Fish Promotions. Lisa will be awarding a $30 GC to winner's choice of online bookseller to a randomly drawn winner via rafflecopter during the tour. Click on the tour banner to see the other stops on the tour. 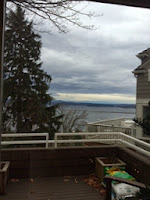 Hi everyone, from not so sunny Seattle! As you can see from the photo, the view from my house is pretty dreary today, which, perversely, I like. On a clear day you can see all the way to Mount Rainier, perfectly framed in the window. Either way it’s a lovely distraction from writing.

I am in what Patricia Highsmith (author of the iconic mystery, Strangers on a Train) calls the development stage of my next tango mystery. This means I look out the window a lot, thinking about what the book needs. 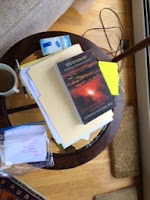 To the left of my chair is a small glass topped table. I’m re-reading Chris Vogler’s The Writer’s Journey that talks about mythic structure. I’m doing this to help me put the general story arc in place BEFORE I start writing scenes. Big learning from the first book! As I go through The Writer’s Journey chapters I write down whatever ideas come up. You may notice a pile of index cards with scribbles on them. Each is an idea for a scene, or perhaps a clue. They won’t all make it into the book, of course. My plan this time around is to have a general outline - which I have permission to deviate from once I get underway. 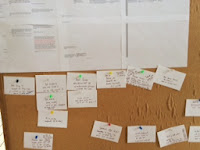 The large bulletin board you see in the last photo shows how the scenes build to a story – it includes a big excel spreadsheet which places the characters across the top and the timeline down the side so I can keep everyone straight. Then I post the index cards in the order of the story.

The only thing missing from the scene today is my cat, Pierre, who likes to sit on my forearms to prevent me from tupisesre38&E4h. Whoops, better sign off now!

What happens when a dancer violates the tango code?

Tango instructor and chronic rule-breaker Antonia “Ant” Blakeley has no respect for authority. So when a much-hated member of the Atlanta tango community is stabbed in the middle of the dance floor, leaving her troubled nephew Christian first on the list of suspects, the last thing she wants to do is use her tango expertise to help the police work out how someone could have struck the fatal blow, unseen. As someone who has experienced police incompetence first hand Antonia doesn’t trust them to find the real killer. So she lies to give Christian an alibi, and the coverup begins.

Unfortunately for Ant, former marine Detective Sam Morrow is on the case and he will do whatever it takes to solve the crime. He’s not about to let Antonia hijack his case. As both Ant and Sam investigate (or in Ant’s case, interfere), the two sleuths are about to find out the more antagonistic meaning of “it takes two to tango.”

“Tango can be about many things—seduction, longing, nostalgia, intimacy, tenderness— you get the picture. Whatever the music and the moment inspires. This song isn’t one we normally dance to but I happen to think it’s a beautiful piece, especially if you understand the words. It’s called ‘Uno.’ One.” Uno, oh yeah, she thought.

“He gave away his heart to a woman who betrayed him and now he can’t love the way he used to. That’s life and death stuff.” She was pleased to see Christian nodding, solemnly. “For this exercise I want you to move with whatever emotion inspires you. No partners. Walk around the room in the line of dance, counterclockwise, everyone, remember? Don’t worry about steps, the idea is to get used to feeling the music and transmitting it through your bodies.”

Antonia started the track, savoring the instrumental opening. When Sosa finally started to sing the yearning in his voice punctured her heart as it never failed to do. The class shuffled around the room, some self-consciously, others with more abandon. One of the Emory students seemed to be channeling Martha Graham, in a good way.

Something out of the corner of her eye caught her attention: a stranger, not that much taller than she was, standing in the doorway. His military bearing, neatly trimmed mustache, and close-cropped sandy hair would have conveyed unyielding strength if it hadn’t been for the fact that his eyes were pale blue and his nose had been broken at least once. He would have been just her type if she were interested in a relationship.

Lisa Fernow grew up on the classic mysteries of Ngaio Marsh and Elizabeth Peters. Lisa has danced Argentine tango since 1996, studying with such legendary masters as Cacho Dante, Susana Miller, and Brigitta Winkler, as well as other inspiring instructors in Atlanta, Seattle, and Portland. Lisa’s short story,Death of a Tango Dancer was featured in King County Library’s Take Time to Read program. She lives in Seattle, Washington. Dead on Her Feet is the first book in a planned series set in the tango world. Read more at www.lisafernow.com.

Buy the book at Amazon, Goodreads, or Barnes and Noble.

Goddess Fish Promotions said…
Thank you for hosting today.
5:44 AM

Unknown said…
Sounds like a great story. Can't wait to read it.
6:53 AM

MomJane said…
Enjoyed the description of your writing location and style of writing.

This excerpt was outstanding.

Karen H said…
Well, it's the last day of your tour and I have to say, I've enjoyed following you and getting to know you and your work. Thanks for a good time!
10:11 AM

Lisa Fernow said…
Thanks for having me on My World of Dreams. And for those those of you who have followed me on the Goddess Fish tour, thank you for your comments. Writing as you can see is a solitary profession and it's nice to know you are out there!
2:02 PM