This post is part of a virtual book tour organized by Goddess Fish Promotions. Sean DeLauder will be awarding $25 Amazon or BN GC to a randomly drawn winner via rafflecopter during the tour.

I should begin by apologizing for my deception. These photos are profoundly misleading because they suggest I have a “writing place”. I don’t. There are certainly locations where I wind up over and over again, but that’s more a matter of convenience and timing. I asked my wife to catch me writing and take pictures, and this is a small sample, but it leaves out examples of when I’m:

1. typing notes on my phone while she’s driving
2. scribbling on napkins at restaurants or dinner
3. writing on a notepad while I’m at work
4. not paying attention while my wife is saying something important
5. standing in the shower, repeating mental notes over and over again in the hope that I don’t forget them (Unlike the others, this was a conscious decision. You’re welcome.)
6. et cetera, ad infinitum 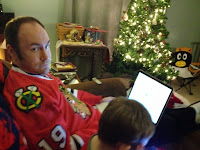 Here we are in the living room with the entire family. Writing during the day, while the boys are awake, is an exercise in futility. I can’t help myself, though, because it’s impulsive, but I’m rarely allowed to sit still long enough to gather my thoughts before I’m asked to play or leave the couch of my own volition. At the moment, my oldest boy, Graham, is either playing a game or watching PBS kids on the iPad, so I have a momentary respite. 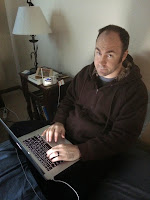 One of the first things I do when I wake up or before I go to sleep is flip open the laptop. Again, it’s a compulsion I can’t resist. For the sake of curiosity, that’s Tom Holland’s In the Shadow of the Sword and Marguerite Yourcenar’s Memoirs of Hadrian, along with the baby monitor, on the nightstand. If I look a bit sheepish, it’s because I always feel preposterous when people take my picture. Also, there’s probably a little scribe in the back of my head noting that I haven’t finished building our bed frame, so the mattresses are sitting on the floor, as though my wife and I are still paupered college students who can’t afford to furnish our house. 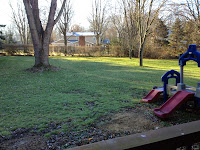 Here’s the view of our idyllic back yard from the open porch, sprinkled with oak and fruit trees, and the boys’ swingset. An excellent place to write, but let’s be realistic. I live in Ohio, so, practically speaking, I could probably spend 3 months out here comfortably. The rest of the time I would be freezing, wet, or sweating. I love the variety of Ohio’s weather, but it’s not great for sitting in. Besides, when I’m writing I’m not paying any attention to what’s going on around me. At least, I’m trying not to. Where I am physically is utterly irrelevant; it’s all about whether or not I have the time to transport myself mentally and explore for a while. 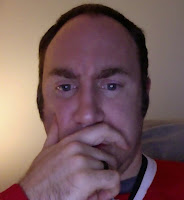 If you were my book, this is what the world would look like to you. That’s right, your view permanently obstructed by my titanic face. I can only imagine how frustrating this must be.

Cast back in time to a perilous wasteland, Andrew is tasked with recording the fate of an individual history has chosen to ignore. Threatened by knee-high creatures called Wogs, an enigmatic beast known as the Forest Monster, and the man orchestrating the slow annihilation of the world, Andrew discovers all hope for salvation and survival rests with a boy without a history.

“Still want to be a hero? Or afraid?” he asked, teeth gritting. His eyes glinted with wildness, but his voice was biting and controlled. “A little fear is good, yes. It prevents you from becoming arrogant, forgetting your limitations. But to face fear and overcome it.” The old man punched a finger in the air. “Ah ha! Then the curtains of limitation begin to draw aside. Success is limited only by a lack of daring.”

“And if death scares you, boy, perhaps heroing is something you should reconsider.”

If Gordimer was trying to frighten him, Billy-Bob thought, he’d been successful. At the same time, Gordimer seemed to be trying to encourage him. To face a fear and overcome it was to master that fear forever. And if he mastered one fear, how difficult would it be to master others? The first step in mastering fear must be to confront that fear.

For an instant Billy-Bob thought Gordimer’s sneer wavered, giving way to a smile of admiration that lit and faded in an instant.

“Doesn't matter, really. Just go West. All the way to Beta. It's where most heroes end up.”

“Over there,” said Gordimer. He pointed down the street toward the blankness beyond.

“I’ve been over there,” said Billy-Bob. “There’s just rocks and a crack that’s too wide to cross.”

“Past that is nothing.”

“Past the nothing, too.”

“What is past nothing?” 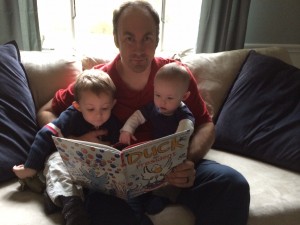 About the Author: This author has held several positions in recent years, including Content Writer, Grant Writer, Obituary Clerk, and Staff Writer, and is under the false impression that these experiences have added to his character since they have not contributed much to his finances. He was awarded a BFA in Creative Writing and Journalism and a BA in Technical Communication by Bowling Green State University because they are giving and eager to make friends. He has a few scattered publications with The Circle magazine, Wild Violet, Toasted Cheese, and Lovable Losers Literary Revue, and resides in the drab, northeastern region of Ohio because it makes everything else seem fascinating, exotic, and beautiful.

Buy the book on Amazon.

Unknown said…
I liked the excerpt
4:22 AM

Goddess Fish Promotions said…
Thanks for hosting!
6:47 AM

Unknown said…
Thanks for sharing a glimpse of my book.
8:01 AM

Rita Wray said…
I enjoyed the excerpt, thank you.
1:08 PM

Rita Wray said…
I like the Blackhawks jersey you're wearing.
1:13 PM

Unknown said…
Thanks Nikolina and Rita.

The jersey was a Christmas gift from my wife. I'm a fan of Chicago sports teams (baseball, football, and hockey), and this completed my jersey triumvirate. I had a very good holiday, despite the fact that I appear to be grimacing in all of my photos. I hope you all enjoyed yours.
1:25 PM

♡♥♬ Carolsue ♡♥♬ said…
I enjoyed the excerpt from the book. Sounds like a winner!
Digicats {at} Sbcglobal {dot} Net
5:26 AM