Something strange, something magical, is going on in the dusty hills behind the small town of Villaloma. Yet each time Linda Peters puts on her running shoes and sets out to find the enchanted kingdom she imagines—full of dancing elves, unicorns, and more—something stops her. And with school starting soon, she only has a few more chances to really search the hills.

While Linda’s frustration and doubt grow, her cousin, Nugu, looks for answers in his books and wonders if maybe, just maybe, Linda’s stories are for real.

The day finally arrives when Linda can run far, the day she is sure she will find her magic city. But when she and Nugu feel their goal must lie just beyond the next hill, they only find more hill.

Is it all a figment of an over-active imagination; a wistful fantasy?

Or is there truly something magical in those hills that only the strong of heart—and leg—can discover?

A rustle from a bush to the side of the trail attracted his attention. He watched, expecting a rabbit or ground squirrel to pop out and hoping for a snake or something he could actually catch. Distracted from his search, he quietly picked his way down from the rocks, watching the bush. It rustled again as his foot touched down.

A wave of apprehension washed over him. Something about the moment was familiar, as if he had been in this situation before. The images were vague, so he dismissed them. His imagination got away from him sometimes.

He tiptoed toward the bush, his eyes scanning and probing, looking for a sign of the critter hidden underneath.

He reached out to grab a branch and pull it back—again the images washed over him, memories… There! It was a… a raccoon? Big round eyes, a wide face with a black, furry mask, short stubby ears, and lots of fur. It was holding something shiny in its hands—paws? The creature quickly concealed what it held and growled, showing a mouthful of teeth.

A safe ten feet away, Nugu watched the bush. It rattled again. The raccoon—it could only be a raccoon, he thought—waddled out into the open. It was walking on two feet. Do raccoons walk on two feet? Nugu tried to remember all of the animal documentaries he had seen. Maybe? And do raccoons get so big? This guy looked like he could take on Jeremiah, Nugu's four-year-old (almost five) brother. It reminded Nugu of something else entirely, some creature from a book… or a movie.

The big, standing raccoon looked at him, and threw its arms in the air. "BaaaagahLOO!" it grunted. Nugu jumped straight up, turned, and ran. 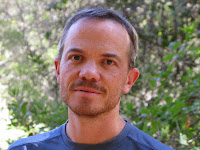 S. S. Dudley grew up in Wyoming, USA, an avid reader and lover of the outdoors. He studied at the University of Wyoming and the University of Illinois. He started his first book (an epic fantasy hand-written in with a blue fountain pen…) when he was 13, but never finished it. At some point (as his mother recently reminded him), he decided that he needed to go do something (like get a job) for a while before he could, or should, write. He did, and spent time in Colombia, Panamá, Antarctica and the dark recesses of large science buildings on college campuses. That done, he now writes, lives and runs in Northern California with his wife and two children. He can be found at his website, Facebook, and on Twitter.

Remember, this book is currently FREE at Amazon. Get your copy here: http://www.amazon.com/Elf-Hills-1-S-Dudley/dp/B00O5KVU4G/
5:03 AM

Unknown said…
Thanks for putting this up!
12:36 PM

♡♥♬ Carolsue ♡♥♬ said…
I liked the excerpt from the book. It sounds like a winner.
Digicats {at} Sbcglobal {dot} Net
3:42 AM

♡♥♬ Carolsue ♡♥♬ said…
I also ennjoyed the author's bio. I always enjoy those.
Digicats {at} Sbcglobal {dot} Net
5:12 AM