This post is part of a virtual book tour organized by Goddess Fish Promotions. Samantha will be awarding $25 Amazon or B/N GC to a randomly drawn winner via rafflecopter during the tour. Click on the tour banner to see the other stops on the tour.

"Moonlight in Winter Park" - A modern-day Beauty and the Beast style Christmas.

All Hope Cooper needed this year was to have the kind of Christmas her family always cherished. But with her parents gone and her only brother having to work, it doesn't look like it's going to work out for her. There's nothing she can do about her parents, but she most certainly can voice her annoyance at her brother's boss for making him work out of town all through the holidays.

Beckett James hates the holidays and everything that goes with them. They were important at one time, but now the only thing that mattered was his company and its continued growth and anyone who worked for him better feel the same way. If not, then they could find employment elsewhere and good riddance. With a major expansion deal on the line, Beckett needs to focus. What he doesn't need is Hope to come barging into his mountain retreat demanding that her brother come home immediately due to an emergency.

Suddenly it's two alone in a snowstorm. Two alone for Christmas. And two alone to fight an attraction that had been there all along. Hope soon begins to realize she may have misjudged Beckett while he comes to see that there really is something special and magical about Christmas. But once they leave their private winter wonderland and return to their normal lives, will the magic still be there?

He stood there in front of her, looking all kinds of handsome. His dark hair slightly mussed, a gray wool scarf around his neck and a black wool jacket covering his muscular build. It wasn’t fair that he could look so good all the damn time – so calm and completely in control – when her life was spinning in the complete opposite direction.

“I…I really need to go,” she said finally and then forced herself to look up and meet his eyes. Damn. They were so dark, so intense and it would be so easy to just look into them forever. A sigh escaped before she could stop it. “Merry Christmas, Beckett,” she said with a bit of a forced smile.

“And I guess a Happy New Year, too,” she added and turned to climb into her car when his hand on her arm stopped her again. It was on the tip of her tongue to ask what he wanted, but suddenly his lips were on hers and Hope had to remember how to breathe.
,br> His lips were gentle at first but once she seemed to overcome her shock and relax, Beckett’s hands came up and cupped her face, caressed her cheeks. Hope sighed as her own hands crept up and clutched the front of his coat. It was so unexpected, such a complete surprise to her that Hope needed to keep herself anchored to something or her knees would surely give out and she’d be in a puddle on the ground.

After Beckett seemed satisfied with introducing himself to her through his kiss, he deepened it. His hand traveled up and into the riotous curls on her head as he moved closer to her. The feel of his lean body pressed up against hers sent Hope’s own body into overdrive. Over and over he slanted his lips over hers, his tongue teased hers, his breath mingled with hers. It was glorious and all-consuming and yet all she could do was purr against him.

Long moments later when Beckett finally lifted his head from hers, he stared down into her face. “Happy New Year, Hope,” he said, his voice slightly rough and gravelly. His hand trailed down her cheek to her chin before he let her go and stepped back.

And walked away.
About the Author: 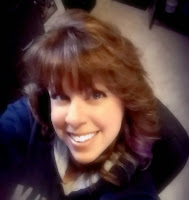 New York Times and USA Today Bestseller/contemporary romance writer Samantha Chase released her debut novel, Jordan's Return, in November 2011. Although she waited until she was in her 40's to publish for the first time, writing has been a lifelong passion. Her motivation to take that step was her students: teaching creative writing to elementary age students all the way up through high school and encouraging those students to follow their writing dreams gave Samantha the confidence to take that step as well.

When she's not working on a new story, she spends her time reading contemporary romances, blogging, playing way too many games of Scrabble on Facebook and spending time with her husband of 25 years and their two sons in North Carolina. For more information visit her website at www.chasing-romance.com.

♡♥♬ Carolsue ♡♥♬ said…
I liked the excerpt from the book. It sounds like a winner!
Digicats {at} Sbcglobal {dot} Net
3:56 AM

Goddess Fish Promotions said…
Thanks for hosting!
8:44 AM

Samantha Chase said…
Thank you so much for sharing and hosting!
10:04 AM

♡♥♬ Carolsue ♡♥♬ said…
I also liked the short bio of the author. I always enjoy reading those!
Digicats {at} Sbcglobal {dot} Net
3:42 AM