My Days by Matthew D. Ryan

This post is part of a virtual book tour organized by Goddess Fish Promotions. Matthew will be awarding a $20 Amazon Gift Card to a randomly drawn commenter during the tour. Click on the tour banner to see the other stops on the tour. For a limited time, Children of Lubrochius is available for half off through Smashwords. Readers may click here: https://www.smashwords.com/books/view/415779 and then use coupon code: LX23U to receive 50% off. Coupon expires June 28, 2014.

My day begins like most people’s: I wake up. I have a quick breakfast, usually just a couple pieces of fruit—something that will give me energy without a lot of calories (I am trying to lose some weight, you know). Then I brush my teeth and do the usual routine. Then my day branches from that of the average person’s.

What I do next, depends on the day of the week.

On Monday, Wednesday, and Thursday I start my writing. From about 9 a.m. to 12 noon I can be found in front of my computer, tapping away conjuring up demons, dragons, and undead with every motion of my flickering fingers. My main focus is fantasy. I’m in the midst of my first series: From the Ashes of Ruin of which The Children of Lubrochius is Book I (There is also a prequel entitled Drasmyr). Right now I’m about two thirds of the way through the first draft of Book II: The Sceptre of Morgulan. Once I’m done that, I intend to take a brief break from the series and write a couple short stories. Then, while I’m editing Sceptre, I’ll move on to book III (I foresee four books plus the prequel in this series).

Anyway, from noon to 1 p.m. I’m having lunch with my father at a cozy small town diner called It’s All Good. Then, I spend the next few hours running errands, doing housework, and doing yard work. Around 3:30 p.m. or 4 p.m. I start dinner and watch a little TV (Neil Cavuto and The Five on Fox). Then, I spend a few hours editing. I’ve found that editing is really the most time-consuming part of writing. I print out the chapter or chapters I am working on and get out one of my several red pens. I read through the chapter and mark my additions, subtractions, and other modifications as I go. I do that a couple times, then enter the changes in my computer and print it out again. Being something of a perfectionist, I start the editing process all over again. After editing I go back to the TV (usually just The O’Reilly Factor) for an hour or so; then I spend another hour reading.

Finally, I go to bed listening to a podcast of Mark Levin.

Tuesdays and Fridays, my day is a little different. I wake up a little earlier because I volunteer at our local hospital from about 8 a.m. to 11 a.m. When I get home at 11 a.m. I’m usually doing random stuff for the next hour or so. Then, I have lunch with my father, and sometimes with my sister. I come home and do much the same stuff as I do on other days, except instead of editing, I work on marketing. I’m kind of a fish out of water as far as marketing is concerned; it’s definitely outside my skill set; but I am learning, if slowly. From there, my day resembles the others well enough.

Saturday is my day off, and I do random stuff all day.

Sunday ... well, I recently decided to devote that whole day to religious reading and writing. I begin with breakfast with my dad, then I relax for an hour or so, listening to Glenn Beck or some other conservative commentator. I’ll read religious material, including the Bible, for a couple hours. As of yet, I haven’t managed to make it through an entire day devoted strictly to religion. I usually dip back into fantasy. To that end, I work on my website on Sundays and also write up blog posts for the week.

Throughout all this, I am struggling with the occasional bout of depression. When it hits me, it usually takes me out for at least a couple days. On those days I do pretty much nothing constructive but stare at the walls. The good thing is that those days always pass and I recover and get back into it.

Anyway, I hope that gives you a good idea of what my days are like.

Across from Ambrisia, Coragan placed his hands on the table and got right down to business. “Your note said someone’s life is in danger?” he asked.

“Possibly,” Regecon answered, leaning back in his chair. “We have another missing person issue. At this point, we don’t know if she is alive or dead or what.”

“Who is it?” Coragan asked.

“My student, Marissa,” Ambrisia interjected. “She disappeared a little over three weeks ago.”

“She disappeared during the day,” Ambrisia said. “Our best diviners are working on the problem—”

“Your diviners are always working on the problem,” Coragan said. “Why is it that your magic never seems to solve the missing person issues. All it does is create questions, and I’m the one who has to sort out the knots.”

“In this case, the vampire, although most probably not the cause of the disappearance is definitely a culprit in a number of complications,” Ambrisia explained. “As you know, a vampire generates an aura of black time that interferes with divination. This aura surrounds the vampire as it moves and disrupts attempts to access the temporal continuum in which it operates creating pockets of inaccessible time as far as divination is concerned. The stronger the vampire, the stronger the aura. Lucian spent nearly a week besieging our guild house. And, as we feared, there is a great deal of temporal distortion caused by his aura.”

“So, once again your magic is rendered useless and you must fall back on more mundane methods. Namely, me,” Coragan said. 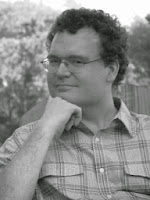 Matthew D. Ryan is a published author living in upstate New York on the shores of Lake Champlain. Mr. Ryan has a background in philosophy, mathematics, and computer science. He has a black belt in the martial arts and studies yoga. He has been deeply involved in the fantasy genre for most of his life as a reader, writer, and game designer. He is the operator of the website matthewdryan.com which features his blog, “A Toast to Dragons” - a blog dedicated to fantasy literature, and, to a lesser extent, sci-fi. Mr. Ryan says he receives his inspiration from his many years as an avid role-player and fantasy book reader. He has spent many long hours devising adventures and story-lines for games, so it was a natural shift moving into fantasy writing.

Mr. Ryan is the author of the exciting dark fantasy novel, Drasmyr, its sequel, The Children of Lubrochius, and a growing number of short stories. His first novel, Drasmyr, has consistently earned reviews in the four and five star range and serves as the prequel to his upcoming series: From the Ashes of Ruin. In addition to Drasmyr and The Children of Lubrochius, Mr. Ryan has published several short stories on-line, including: “Haladryn and the Minotaur,” “The River’s Eye,” and “Escape.”

Goddess Fish Promotions said…
Thanks for hosting!
6:37 AM

Unknown said…
Thanks for hosting me today! I really appreciate it!
8:59 AM

collenga said…
Wow! What a rarity to find someone who loves Fox News, Mark Levin, and Glenn Beck! I get so much slack for it! Do you live in a Republican/Conservative area? my town (Youngstown, OH) is mostly Dem as well as my family. I am the lone black sheep who doesn't worship the current president!! Love to find others who thing the 'right' way!! :D
8:18 PM

Unknown said…
Elena--I'm glad you liked it. All the more reason to check out the book! (hint hint)
Collenga--my hometown is a reasonable mix of libs and conservatives as far as I know, but most of my friends are libs. And I definitely think that conservatives are a minority in the writerly/artistic community. Don't know why that is, though.
10:00 PM

Mary Preston said…
Thank you for sharing your day/s.
3:34 AM

Unknown said…
Mary--Thanks for your interest. I'm glad you enjoyed it.
6:33 PM