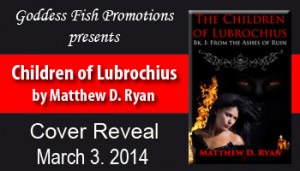 This post is part of a virtual book tour organized by Goddess Fish Promotions. Matthew will award a metal miniature of a demon from the Reaper Fantasy Miniatures to a randomly drawn commenter during the tour (US ONLY). Click on the tour banner to see the other stops on the tour. 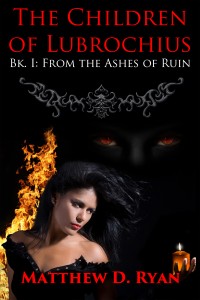 “We have gone a bit off topic, I think,” Korina said.

“You asked about magic,” Lucian said with an arrogant sneer. “I told you what I know.”

Korina frowned. He had not told her much. Barely a smattering. Instead, they had detoured into a lecture on philosophy. “Tell me about the Sceptre of Morgulan,” she said. She knew much already: the sceptre was a weapon of tremendous power wielded by Morgulan during the course of many wars and battles fought over a thousand years ago. It had mysteriously disappeared immediately after Morgulan’s demise.

Lucian sighed as if surrendering to the inevitable. “The Sceptre of Morgulan?” The vampire locked his gaze with her, and smiled. “The wizard Arcalian was also interested in the sceptre. That interest got him killed. As you may or may not know, I have a history with wizards. Generally speaking … I win.”

The arrogant monster! He had lost to Regecon and the guild.

“I’m not interested in your boasts, vampire. I’m interested in the sceptre. Tell me what I wish to know.” A part of her doubted if she was ready for the knowledge the vampire might give her. The sceptre, after all, was an artifact of legend. It had destroyed armies. She longed for its power, but she knew that she must match its power with her own else it would come to rule her. An untrained peasant with a sword was as much a danger to himself as he was to others.

Lucian folded his arms beneath his breast and looked askance at the wall. “Ask your questions, then,” he said. 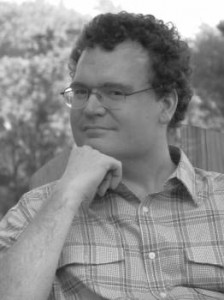 Matthew D. Ryan is a published author living in upstate New York on the shores of Lake Champlain. Mr. Ryan has a background in philosophy, mathematics, and computer science. He has a black belt in the martial arts and studies yoga. He has been deeply involved in the fantasy genre for most of his life as a reader, writer, and game designer. He is the operator of the web-site matthewdryan.com which features his blog, “A Toast to Dragons,” a blog dedicated to fantasy literature, and, to a lesser extent, sci-fi. Mr. Ryan says he receives his inspiration from his many years as an avid role-player and fantasy book reader. He has spent many long hours devising adventures and story-lines for games, so it was a natural shift moving into fantasy writing.

Mr. Ryan is the author of the exciting dark fantasy novel, Drasmyr,, its sequel, The Children of Lubrochius, and a growing number of short stories. His first novel, Drasmyr, has consistently earned reviews in the four and five star range and serves as the prequel to his upcoming series: From the Ashes of Ruin. In addition to Drasmyr and The Children of Lubrochius, Mr. Ryan has published several short stories on-line, including: “Haladryn and the Minotaur,” “The River’s Eye,” and “Escape.”

Goddess Fish Promotions said…
Thanks for hosting!
7:20 AM

Unknown said…
Thanks for hosting me today, I really appreciate it.
8:31 AM

Unknown said…
For those of you who have read Drasmyr (the prequel to Children): What is your favorite moment in the book?
1:18 PM