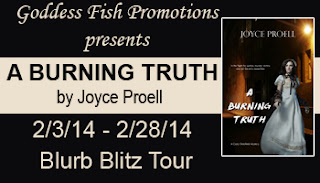 This post is part of a virtual book tour organized by Goddess Fish Promotions. Joyce will be awarding a $20 Amazon GC to a randomly drawn commenter during the tour. Click on the tour banner to see the other stops on the tour.

There’s no shortage of deadly deeds in 1881 Chicago as school administrator Cady Delafield and entrepreneur Doyle Flanagan plan their wedding. When one of Doyle’s workers is brutally killed he must use his considerable power to stop a mysterious enemy bent on destroying his reputation and business empire. But as Cady and Doyle struggle to keep their marriage on track, the murder victims might not be the only casualties.

Doyle sat in the carriage, his brain frozen and his limbs unable to move. He watched Cady run up the steps and disappear into Ophelia’s impenetrable stone manor. When the front door boomed shut with the noise of a cannon blast, he jumped. He lurched forward and exploded out of the vehicle. She wasn’t getting rid of him so easily. In fact, she wasn’t getting rid of him at all. He had a voice in the matter. He intended to be heard.

Just as soon as he thought it, his steps faltered and he ground to a stop.

Now was not the time to try to reason with her, not when she was in a cold fury. He pumped a fist against a thigh and stared at the mansion’s rock façade, aware her current state of mind was as solid and unshakable. Even if he managed to get beyond the front door, she wouldn’t listen. Not now.

His head fell back. A piercing ache tore through him, as if his heart and soul had been shredded and tossed aside. Gunmetal storm clouds reeled over the sky, bleak and threatening. The bite in the air made his cheeks sting. Inside he was hollowed and gutted. His fingers curled and uncurled. Muscles coiled, he pivoted with a fierce twist, snapped an order to Phelps then threw himself back into the carriage. His next move must be deployed with utmost care. The carriage jolted forward and thrust him back against the seat cushion. She needed time to cool. Then he’d be back, and she’d listen to what he had to say.

About the Author:Joyce grew up in Minnesota and attended college and grad school in Chicago. After working in mental health, she retired at a young age to write full-time. Her first book, Eliza, was published in 2012. A Burning Truth is the second in the Cady Delafield series. When she isn’t writing mysteries or historical romances, she loves to travel, walk, read, and do crossword puzzles. She and her husband make their home in rural Minnesota in her very own little house on the prairie.

Buy the book at Amazon, Smashwords, Kobo, or Barnes and Noble.

joyce said…
Thanks, Judy, for hosting today. I'm delighted to share a bit of A Burning Truth with your blog readers.
6:54 AM

Goddess Fish Promotions said…
Thanks for hosting!
7:48 AM

Stormy Vixen said…
Great excerpt! Thanks for sharing it and the giveaway. Sounds like a really good book. evamillien at gmail dot com
5:02 PM