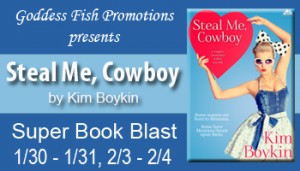 This post is part of a virtual book tour organized by Goddess Fish Promotions. The author and publisher will be awarding a $15 Starbucks card, Valentine mug, and yummy candies to a randomly drawn commenter during the tour (US only). Click on the tour banner to see the other stops on the tour. 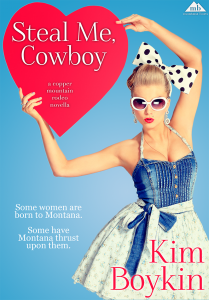 Unbeknownst to her boyfriend, Sassy South Carolina hairstylist, Rainey Brown, is headed to Missoula, dead set on giving her minor league baseball player boyfriend of four years an ultimatum. Either put a ring on it or let her go, preferably not the latter.

When Rainey's piece of crap car dies in the middle of Nowhere, Montana, she's sure she's a gonner, until gorgeous restaurateur Beck Hartnett stops to help. Beck falls hard for Rainey, and knows she would admit she's fallen for him too, if she wasn't too stubborn to admit it. Beck has five days before the car is repaired to steal Rainey away from a boyfriend who doesn't deserve her. Five days before she's gone for good.

My last client of the day meticulously inspected her razor-sharp bob, trying to find a reason to stay in my chair. This was a language I knew well, usually a sign that something was going on in a client’s life, something they would never tell their sister or their mother or even their therapist. They tell me because I’m a hair stylist. For most women, that trumps everything, but for God’s sake, why did Katie Mills have to wait until now to start her therapy session?

She handed the mirror back to me and looked into the big round one on my station. “Jackson’s cheating. Again.” This was something Katie couldn’t tell anyone, or at least that’s what she swore to me. She attributed it to the fact that she was one of my first clients when I got out of beauty school six years ago and we were friends. And we are, but that wasn’t it. There’s some kind of transfer of trust that takes place when you snap a cape on a client, when you stand over them with a pair of scissors and their wet hair, either giving them what they want or saving them from making a huge mistake.

I looked at her, knowing if things went the way they normally did when her husband couldn’t keep his pants zipped, we’d end up getting coffee or tapas at the bar two doors down, drinking wine and talking for hours. No wonder she’d asked for the last appointment of the day. I glanced at the clock. Adam would be landing any minute, waiting for me at baggage claim with that tall delicious body, that beautiful smile. Then he’d spend the rest of the weekend making me forget how tired and frustrated I’d been lately with our relationship.

Katie knew as well as anyone that I hardly ever got to see Adam. I’d met him four years ago when he was playing minor league baseball for the Tampa Yankees and instantly knew he was the one. Since then he’s lived with me here, in Columbia, South Carolina, when he wasn’t bouncing around from farm system to farm system, trying to make it to the major leagues. But moving up the baseball ladder is the equivalent of winning the lottery, and as much as I loved Adam… since I met him, he’d been steadily moving down the ladder. “Katie, I’m sorry, really I am—.”

“I’m just so sick of Jackson’s shit, Rainey. I know it’s some girl in the athletic department. She’s probably twenty something with tits up to here.” If they were up to her neck, the girl must look like an alien. “Wanna grab a coffee?”

Jackson was a serial cheater, but as athletic director at the University of South Carolina, he made a lot of money. Katie liked the money so much she had put up with his antics at three different universities. She’d had babies thinking that would keep him home and monogamous, but all she had to show for her efforts were three towheaded little boys and a chronically broken heart.

“I can’t, Katie, I have to pick Adam up.” She looked like I’d stuck a knife in her back. “We haven’t seen each other in three months.”

Katie’s chin quivered as she held my gaze in the mirror, tears pooled in her chocolate brown eyes. She was still a beautiful woman, a Mississippi belle who’d somehow lost herself along the way. I could have told her she was still gorgeous, that she was bright and funny, and sexy when she turned on her Ole Miss charm.

But the look in her eyes reminded me of myself lately. I thought I was used to loving Adam Harper any way I could get him. Lately, I’ve wanted more. Needed more. “I’m sorry, Katie.” I couldn’t look at her when I unsnapped the cape. “I can meet you for coffee Sunday afternoon after I drop Adam off at the airport.”

What you always do. You go back to Jackson. I wish you wouldn’t, but you do the insanity dance over and over again, losing weight, shopping, Botox, trying to change yourself in hopes that your husband will change, but he can’t or he won’t. I put my hands on her slender shoulders and said the words I’d wanted to say to her since I met her, the words I thought were too pushy or too dangerous.

“Katie, you are beautiful. You are valuable. And if that bastard can’t see that, to hell with him.”

“Are you saying I should leave my husband?”

Yes. No. These are the moments when I feel the truth, that I’m a hair stylist and not a trained therapist. I don’t want to be responsible for a broken marriage—hell, broken marriages— because Katie isn’t the only client who has a spouse like Jackson, but I had to leave. Now.

I rifled through my station and found the business cards Ruthie Cox gave me. She was a therapist and said I’d probably never need to pass out her cards because in many ways, Ruthie felt I was better equipped to help clients than she was. It took several visits, sometimes months, for Ruthie’s clients to trust her enough to tell her their problems, and yet those same people could sit in the chair of a hairstylist they hardly knew and bare their souls.

“Call Ruthie. She’s a wonderful therapist. She’ll help you sort this out. I love you Katie, I do.” The tears were coming. Again. I’d cried a lot lately missing Adam so much, wishing just once that he’d pick me over baseball. “It’s just been so long since I’ve seen him, and I only have thirty-six hours before he flies out again.” I choked out the last words, grabbed my purse, and left without looking back.

Kim Boykin is a women's fiction author with a sassy Southern streak. She is the author of The Wisdom of Hair, Steal Me, Cowboy, and Palmetto Moon (Summer 2014.) While her heart is always in South Carolina, she lives in Charlotte, North Carolina, with her husband, 3 dogs, and 126 rose bushes.

Goddess Fish Promotions said…
Thanks for hosting!
9:41 AM