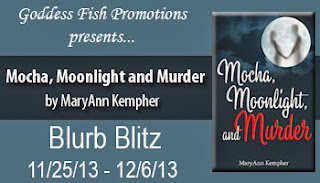 This post is part of a virtual book tour organized by Goddess Fish Promotions. MaryAnn will be awarding an autographed print copy of the book (international giveaway) to a randomly drawn commenter during the tour. Click on the tour banner to see the other stops on the tour.

Instead of feeding her late-night appetite, a midnight food run nearly gets 28-year-old Katherine O’Brian killed. She’s the only person to see the man who brutally murdered a local woman, and the killer is hell-bent on making sure she doesn’t talk.

Scott Mitchell left a broken engagement behind when he moved to Reno, and the last thing he needs is more melodrama. But when he and Katherine are paired for a college project, that’s what he gets. It can be very distracting when someone is out to kill your lab partner. Together, they try to figure out what the police haven’t been able to—the identity of the murderer. Passion flares, but with Katherine’s life in danger, romance seems like more than a bad idea.

Scott and Katherine will face jealousy, misunderstandings, lust, and rivals, not to mention attempted murder—and all before their first real date.

When Katherine first woke up on Saturday, she was feeling a little depressed. Right away, she started thinking about Scott and whether or not they could remain friends. But when she remembered her plans for the day, her mood lifted. She was going to a new mall - super-exciting because it was modeled after Macy’s in New York and had seven floors. There was even an observation deck. When she arrived, the first thing she did was take the elevator to the top.

It was a cold day, though beautiful, so she wasn’t surprised that only a few other people rode up with her to enjoy the view. She walked around, peeking over the side at the people below. She thought how spectacular it must be up there at night. After a few more minutes she left, deciding to take the stairs.

She’d walked down three flights when she heard a door slam above. She cringed as the sound of feet hitting the metal stairs echoed off the walls and grew louder the closer they came. In a matter of seconds, she was faced with another masked man, scarier than the one she’d encountered in her apartment, because this one wore a diabolical clown mask, complete with garish makeup and a pointy-toothed smile. At first she thought it was a joke, some stupid teenager trying to be funny, but then he pushed her against the wall and held a knife to her throat.

Katherine held her hands up defensively. “What do you want?”

He raised the knife.

Katherine screamed, “Help!” as she shoved the man as hard as she could and tried to run down the stairs, but he took them three at a time and grabbed her by the hair, jerking her backward. Tears were streaming down her face.

He pushed her down and she hit her head on a stair. She watched, dazed, as he raised his knife once more, but then a door slammed below. She could hear footsteps running up the stairs. The man looked over his shoulder.

The last thing Katherine saw was his steel-toed boot; it grazed her head as he rushed up the stairs.

MaryAnn Kempher's writing is infused with romance and mystery. Her love of romance stories goes back to her teen years spent living in Reno NV where Mocha, Moonlight, and Murder is set. MaryAnn's travels have taken her to beautiful cities in Italy, Southeast Asia and the sultry desert country of Qatar. She met her husband on one of her romantic misadventures. She has two children and currently lives in Florida where she and her family share their home with two dogs and a cat. Her writing influences include favorite authors Jane Austen and Agatha Christie. She's also a huge fan of the Hercule Poirot mysteries.

Her guilty pleasures include any and all sweets, including a good cup of Mocha.

For more about MaryAnn Kempher, visit www.MKempher. Buy the book at Amazon or Barnes and Noble.

Goddess Fish Promotions said…
Thank you for hosting today.
5:39 AM

MomJane said…
An exciting excerpt. Sounds like a really great mystery/romance,
8:27 AM

Natasha said…
Thanks for the excerpt and the chance to win!
Sounds really good!!
natasha_donohoo_8 at hotmail dot com
8:25 PM