The Goats of Santo Domingo by Robert McEvilla -- Spotlight and Giveaway 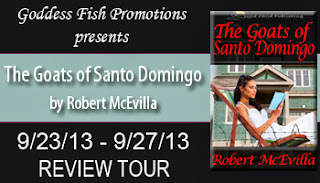 This post is part of a virtual book tour organized by Goddess Fish Promotions. Robert will be awarding a $10 GC To Wild Child Publishing to a randomly drawn commenter during the tour. Click on the tour banner to see the other stops on the tour.

Whenever John Romero was asked if he was wounded in Vietnam, he always got a confused look when he replied that his eye was lost in Santo Domingo.

A former baseball player with just six weeks left to serve in the army, John's plans for making a comeback are interrupted when his unit is deployed to the Dominican Republic, and he finds himself in a combat situation. While dodging bullets, he meets a beautiful Dominican woman, the aloof, Ramona. She inflames the private passions of the paratroopers that view her from their command post. Romero plots a course to win her affections, but the political intrigue and the carnage in the streets of Santo Domingo conspire to thwart his every move, forcing him to make a drastic decision.

A coil of concertina wire stretched down the middle of the street between the sandbags Romero stood behind and her turquoise house. Behind him was a schoolhouse that his unit had occupied since their arrival. The old structure reminded Romero of the Alamo.

“Keep your eye on that house,” Rosen had said to him. “You’ll see her if you get posted at the sandbags; she comes out every morning around nine and reads a book for half an hour—a real beauty queen.” Romero had heard the other men in his squad talking about her. They referred to her as Miss Santo Domingo, the Princess, or the Dominican Damsel.

The door opened on the brightly painted stucco house. She wore a short white skirt, the hem well above the knee. The lawn chair she held was unfolded with a nobility of motion, the way a virtuoso opens his violin case. She sat down, crossed her shapely legs, and opened a book before setting it daintily on her lap. For a confused moment, Romero was convinced she was Carla. He stepped out from behind the sandbags and was a few strides off the curb before the coiled barbs stopped him. The closer view made him see that it wasn’t Carla after all. She was somebody else—a stranger—both mysterious and recognizable. She was perhaps Miss Swanson, his fourth grade teacher to whom he had written his first love letter and hid it in his school bag. There was a bit of Anna about her, too, the little girl who’d lived across the street from him when he was twelve. She was someone who had once held him tight, but not close enough—someone who had left and gone away.

A real Spanish Contessa, he thought.

Robert McEvilla is a retired stationary engineer who lives in a log cabin in the backwoods of Michigan's Upper Peninsula. His short stories have been published in various literary magazines. This is his first novel which is based on his experiences in the Dominican Republic.

Buy the book at Wild Child Publishing and catch up with the author on his website.
giveaway Goddess Fish Robert McEvilla Virtual Book Tour

Goddess Fish Promotions said…
Thank you for hosting
6:02 AM

Unknown said…
Greetings to one and all, and my warmest thanks is extended to the host. I appreciate the time you're taking on my behalf.
10:42 AM

Unknown said…
Greetings to one and all, and my warmest thanks is extended to the host. I appreciate the time you're taking on my behalf.
10:43 AM

Unknown said…
Question:Has anyone out there ever read a multi-genre novel where a literary work was wrapped around a war story and there is a multi-ethnic love interest which included a murder mystery?
10:58 AM

Stormy Vixen said…
Come think of it I have not. Thanks for sharing your book and the giveaway. evamillien at gmail dot com
7:57 PM