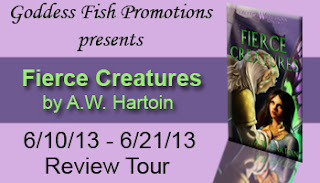 This post is part of a Virtual Book Tour organized by Goddess Fish Promotions. The author will award an ebook copy of either A Fairy's Guide to Disaster or It Started with a Whisper to a commenter at each tour stop, and a grand prize of $25 Amazon GC to one randomly drawn commenter. Click on the tour banner to see the other stops on the tour.

Another day. Another disaster.

After surviving a kidnapping and battling with spriggans, Matilda Whipplethorn finds her life in a suburban human house pretty boring. She’s been excluded from school because of her fire-making abilities and her former friends are afraid of her. Salvation comes in the form of a life-threatening illness. Her tutor, Miss Penrose, needs a medication and there’s only one place to get it, the spriggans. Matilda heads back to the antique mall to save Miss Penrose even though it just might cost her everything.

Fire was a friend of mine. I loved how it formed in my palms, pooled, and overflowed, oozing through my fingers to drop down in tiny orange spirals into the basin my father had fashioned out of a metal button. I lay on my stomach, propped up on my elbows, watching my fire, an endlessly fascinating endeavor and a good thing, too. My father was hammering on a needle, trying to make it into hooks for my mother’s pots and pans. It wasn’t going well and I expected to be there for a long time, providing Dad with fire for his forge.

Dad tapped me on the head, and I looked up. “What?”

“I need more,” he said, frowning at me from behind the safety mask he’d fashioned out of an acorn shell and some stuff the humans called Plexiglas.

I formed a fireball the size of my head and dropped it in the basin. Sparks flew out in curlicues and menaced Dad. He jumped back and slipped on his pile of metal shavings.

“Matilda, you did that on purpose,” he said, narrowing his brown eyes at me.

“It was an accident.”

“When it comes to fire, you don’t have accidents.”

A human face came down beside my dad and grinned at me. Judd was one of the few humans that could see us. It was very unusual for a human to see fairies, but Judd had turned out to be remarkable in many ways. As was his sister, Tess, who’d been the first to see me. The two of them surprised me on a daily basis.

A.W. Hartoin is the author of the Mercy Watts mystery series and the Away From Whipplethorn fantasy series. She lives in Colorado with her husband, two children, and six bad chickens.

Mary Preston said…
Such a beautiful description of the fire created. There should be more fairies. I always looked for them in the garden.

Goddess Fish Promotions said…
Thank you for hosting
5:52 AM

Unknown said…
I guess I'm coming late to the blog tour party! I like the sounds of Fierce Creatures though!

Karen H said…
Sorry for the late post. I’m playing catch-up here so I’m just popping in to say HI and sorry I missed visiting with you on party day! Hope you all had a good time!
kareninnc at gmail dot com