The Writer's View by Casey Dawes 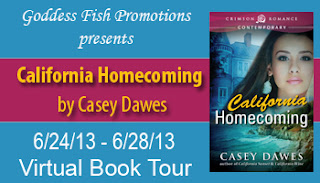 This post is part of a virtual book tour organized by Goddess Fish Promotions.Casey will be awarding a bottle of Santa Cruz Mountain Pinot Noir (a wine served in California Homecoming)(US ONLY) OR a $25 Amazon gift certificate (winner's choice) to a randomly drawn commenter during this tour and her Virtual Reviews Tour, as well as donating $20.00 to Fisher House (http://www.fisherhouse.org/donate/) in honor or memory of a serviceperson of the winner's choice. Click on the tour banner to see the other stops on the tour. 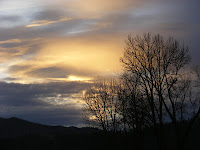 After a great deal of pain and moving, my husband and I have managed to wind up in paradise. We've rented a house in Missoula, Montana, on the banks of the Clark Fork River. I have the entire upstairs of the house for my quilting, writing, and dreaming.

I've positioned my desk so I can look out directly at the river and watch the seasons change. The contrast between winter and spring is quite dramatic, but it can happen slowly. As spring turns to summer the subtle variations in green meld into the darker hues of summer.

I can watch the arrival of a dramatic thunderstorm or hide from the blistering heat of a summer's day.

Best of all, I can watch the parade of animals and birds. We have a fox that slips through, too fleet for picture-taking. The chickadees, goldfinches, and house flit through the branches of the tree outside on their way to the bird feeder. I can catch a glimpse of the pileated woodpecker, a bird my husband fondly refers to as a “pileated jackhammer.” 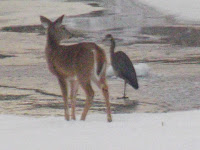 My favorite winter bird is the kingfisher. His jaunty perch in the frozen weather reminds me the weather will change, and the best fishing is to be had when conditions are difficult. On the other side of the river, the heron stalks to a spot, takes a stance, and seemingly doesn't move for hours. This might change if a deer decides to join him on the sand bar, each trying to determine what strange creature has wandered into their territory. 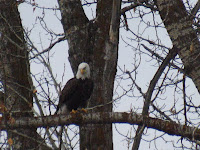 The large birds—hawks, ospreys, and eagles--scatter the smaller ones merely by flying overhead. Before summer's leaves cover its branches, I can often watch the stoic figure of a hawk or eagle competing with the kingfisher or heron for a meal.

These are distractions from my work, true, but they provide the rich fertilizer for my imagination and bless me with their presence.

When I'm heavily in a story, I'm immersed in that world, whether its the Central Coast of California or the barren nothingness of Nevada. When I need to take a break, all I need to do is look up and nature delights me with her ways.

Author Casey Dawes lives and writes on the bank of the Clark Fork River in Montana with the love of her life and two cats who think they own the joint. To learn more about Casey, visit her website: www.stories-about-love.com.

When Sarah Ladina purchased an old Victorian in Costanoa with plans to turn it into a high-end destination inn, she had no idea life could get so complicated. Well, maybe she did. As an unwed pregnant woman who couldn’t cook, she had her work cut out for her. A good-looking disabled veteran, a doctor who orders modified bed rest, and an ex who’s trying to get back into her life make her wonder if she’ll ever be able to stand on her own and open the inn in time for her mother’s best friend’s wedding.

After returning from duty in the Middle East wounded in both body and spirit, Hunter Evans is in search of employment and a home, but finding a job has been tough and housing doesn’t come cheap in Costanoa, the town that he loves the most on the California Coast. Can he strike a deal with the pretty innkeeper to trade a room for handy work?

Mary Preston said…
I'd be forever distracted looking out of the window. It does sound lovely. I enjoy my craft work, but I haven't tried quilting yet.

Goddess Fish Promotions said…
Thank you for hosting
7:55 AM

Unknown said…
It sounds like you have the perfect writing space

fencingromein at hotmail dot com
8:52 AM

Casey Dawes said…
Thanks for hosting!

Mary, it can be distracting, particularly when I'm in the middle of a coaching call (my day job) and an eagle flies overhead! I took up quilting about 8 or 9 years ago, and I enjoy a lot of other crafts as well.

Rita Wray said…
I love Montana, it is beautiful.

Casey Dawes said…
Montana IS beautiful! Thanks for stopping by again! Casey
3:10 PM

Catherine Lee said…
I like how you support Fisher House, Casey. That's a worthy cause!
catherinelee100 at gmail dot com
9:52 PM

Unknown said…
Awesome wildlife stuff! I wish we had even half of those around my house! We've only got birds and squirrels...

Karen H said…
Sorry for the late post. I’m playing catch-up here so I’m just popping in to say HI and sorry I missed visiting with you on party day! Hope you all had a good time!
kareninnc at gmail dot com