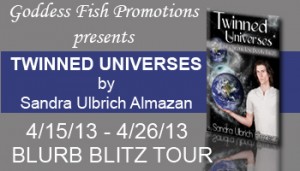 This post is part of a Virtual Book Tour organized by Goddess Fish Promotions. Sandra will award one randomly chosen commenter the choice of a $50 Amazon gift card or a gift pack of all of the following items related to Twinned Universes: two Shakespeare mugs, a Sears tower pendant, a book by Carl Sagan (Pale Blue Dot: A Vision of the Human Future in Space), and a signed copy of the first book in the series, Lyon's Legacy. Click on the tour banner to see the other stops in the tour.

Paul Harrison always wanted to play Hamlet, but he never expected he’d live the role first. In the aftermath of a family tragedy on 21st century Earth, Paul discovers he’s the clone of Sean Lyon, his great-great-grandfather and a famous TwenCen musician. Suspecting his mother’s death was no accident, Paul comes up with a plan to trick the answers out of the great-uncle who had him cloned. But in order to make his plan work, Paul needs help from Sean himself—and Sean’s time is running out in the TwenCen universe next door.


Although Paul’s family lives on the spaceship that travels between the universes, he’s never been allowed on TwenCen Earth. Now, with the help of his friends, his disguise-creating holoprojectors, and a quantum quirk, Paul must make his way to Sean while evading other time travelers who fear he’ll change the history of the TwenCen universe. If Paul is to achieve justice, he must not only risk his own life, but the wormhole connecting the universes. “To be or not to be” was a simple question in comparison....

Excerpt
Paul drew his knees up to his chin as he thought. The space elevator lurched occasionally, but it ran so quietly all he could hear were snores from Cass and a sporadic click from Dad’s handheld. Why would Great-Uncle Jack want him so desperately? Why should he care about Paul so much? He was so obsessed with Sean Lyon it seemed impossible for him to have room in his mind for anything else. Unless...Paul was linked to Sean somehow? They were several generations apart; Jack himself was closer to Sean than Paul was. Besides, Cass was also Sean’s descendant, so that didn’t fit with Jack’s ignoring her. He still badgered Mom about music—well, he had, even on this last visit—so it couldn’t be because Cass was a girl.

Paul remembered the photo and holo Great-Uncle Jack had sent him. What did the Elvii Twins have to do with him anyway? The Elvii Twins were clones of a TwenCen rock star like Sean Lyon. Someone had traveled on the Sagan through the wormhole and into the alternate universe to get Elvis Presley’s DNA. Mom had worked on the Sagan since before Paul was born, and Dad had said she’d gone down to TwenCen Earth at least once. Paul looked a lot like Sean....

Feeling as if he’d forgotten his most important line in the middle of a performance, he asked, “Dad, am I…am I Sean Lyon’s clone?”

About the Author: Sandra Ulbrich Almazan started reading at the age of three and only stops when absolutely required to. Although she hasn’t been writing quite that long, she did compose a very simple play in German during middle school.

Her science fiction novella Move Over Ms. L. (an early version of Lyon’s Legacy) earned an Honorable Mention in the 2001 UPC Science Fiction Awards, and her short story “A Reptile at the Reunion” was published in the anthology Firestorm of Dragons. She is a founding member of BroadUniverse and a long-time member of the Online Writing Workshop for Fantasy, Science Fiction, and Horror.

Her undergraduate degree is in molecular biology/English, and she has a Master of Technical and Scientific Communication degree. Her current day job is in the laboratory of an enzyme company; she’s also been a technical writer and a part-time copyeditor for a local newspaper. Some of her other accomplishments are losing on Jeopardy! and taking a stuffed orca to three continents.

She lives in the Chicago area with her husband, Eugene; and son, Alex. In her rare moments of free time, she enjoys crocheting, listening to classic rock (particularly the Beatles), and watching improv comedy.

Sandra can be found online at her website, blog, Twitter, and Facebook. Upcoming projects from Sandra include a standalone fantasy story called “The Fighting Roses of Sharon”; Twinned Universes, the second book in the science fiction Catalyst Chronicles series; and Scattered Seasons, the first book in the fantasy Season Lords series.

Andra Lyn said…
Thanks for sharing the blurb and excerpt! Looking forward to reading it!

Sandra Ulbrich Almazan said…
Thanks for hosting!
7:23 AM

Rita Wray said…
The story has a very interesting plot. Love the excerpt.

MomJane said…
What a fascinating scfi story. I love the excerpt.
2:54 PM

Sandra Ulbrich Almazan said…
Thanks again to the host and to everyone following along on this tour.
10:48 PM

Karen H said…
Sorry for the late post. I’m playing catch-up here so I’m just popping in to say HI and sorry I missed visiting with you on party day! Hope you all had a good time!

LAWonder said…
Thank you for the exerpt. It sounds like a unique series. It is the type of Sci-Fi I enjoy.
8:40 AM