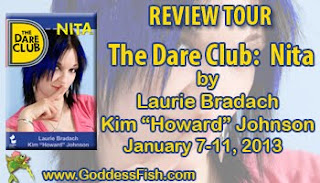 Nita Congroy has relocated to the most boring town on the planet. That is, until would-be boyfriend Brad Keeley spills the beans about a secret group of girls known as The Dare Club. During her subterranean initiation below the high school, Nita overhears a plan by contractors and school officials to embezzle millions of dollars in grant money. When she is betrayed, The Dare Club's pranks become deadly serious.

With the clock ticking, Nita will need the help of her new friends to expose the chilling plot--and hopefully survive long enough to snag a date to the Homecoming Dance.

REVIEW: I really enjoyed this book--and what's not to love? A secret club designed to liven things up in a boring, small town school. I would have LOVED a club like that in my high school!

There's a lot of room in this series to focus on the various members of the club--and to get to know the other students at the high school.

The mystery is well-written, with just enough darkness to keep my interest. I'm really looking forward to the other books in the series.

About the Authors:Kim “Howard” Johnson has written comic books for Marvel, DC, and Event Comics. He is a director of improvisational comedy, an actor, and is rumored to hang around with the Monty Python gang. Howard’s other books include Monty Python’s Tunisian Holiday and The Funniest One in the Room.

Laurie Bradach has nearly escaped the world of comics. Currently, she devotes her time to writing action-adventure stories without the use of word balloons. She is active in her local Romance Writers of America chapter, Heart and Scroll, and is a founding member of Random Moon Books. Laurie is also the author of A Good Draw, a romantic suspense novel.

Howard and Laurie are delighted to have written their first book together without killing each other. Be sure to look for the second book in the series, The Dare Club: Lindy.

Karen H said…
The authors are new-to-me as is their book. I like the sound of what I've been reading and even though I don't normally read YA, this one sounds like it easily crosses ages groups.
11:40 AM

Laurie Bradach said…
Thank you Karen! It's the first novel we've co-written (although Laurie's first solo book, A GOOD DRAW, just came out last fall, and Howard has written a number of books). I do think you'll like this--we don't write down to our audience, and we've had a number of adult readers who really liked it as well. Thanks for commenting!

And thanks to Judy for the great review--and to Goddess Fish for arranging our Review Tour this week! Much appreciated!

Anonymous said…
It sounds interesting with the mystery and the group of friends.

Mary Preston said…
I do love the idea of a secret club. This is going to be a fun read I'd say.

Goddess Fish Promotions said…
Thank you for hosting!
6:17 AM

MomJane said…
A really great review. The rest of the series are bound to be just as awesome.
9:18 AM

Christine D. said…
I love books where a secret club is introduced in a school!

How is co-writing? I do not think I would ever want to do that, because I can be bossy.