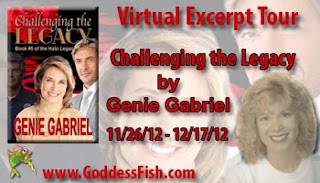 This post is part of a virtual book tour organized by Goddess Fish Promotions. Genie will be giving away a $25.00 Amazon Gift Card to one randomly drawn commenter during the tour and a $10.00 Powell's Bookstore Gift Card to one commenter at every stop. Click on the banner to see the other stops on the tour.

Super-mom Tallie O'Shea took on eight adopted children and built a legacy of compassionate justice with her policeman husband. When he is gunned down, she doesn't think it's an accident. Then a former lover shows up and the lies from her past start unraveling. As dangers explode around her, can Tallie set things right before everything she loves is destroyed?

She was beautiful. Just a few inches over five feet. However, Marly didn't seem small, perhaps because she so expertly loaded the small arsenal of weapons from a gun safe and handed them off to people lined up and waiting, as if they had done this many times before.

Even Ruby seemed to have grown stronger and stood in line waiting for a gun.

A glance passed between Tallie and Ruby before Tallie handed the other woman a shotgun and an extra box of ammunition.

As Ruby slid down beside one of the windows on the main floor, another woman--tiny with white curls and the same determined expression as most of the other townsfolk--approached Tallie. "I can help pass those out."

With a grim smile and a nod, Tallie handed weapons off to the little old woman to load before handing them to those waiting in line.

Mostly women and a few teenagers, Pierce noted. Where were the men? What had he stumbled into?

Get "The Bodyguard" by Genie Gabriel free on Kindle today (and every Monday through December 24th) here: http://tinyurl.com/aot3veu About the Author:

For years I've been fascinated by the puzzle of why some people collapse under life's traumas and others emerge triumphantly stronger. These triumphs of the human spirit over the ugliest of adversities became the basis for my stories. Yet my dramatic stories have always contained touches of humor, and sometimes I have great fun writing romantic comedy novellas. However, in all my stories, my passion for writing romance is an outlet for the powerful messages that people can overcome great difficulties, and true love can turn life’s heartaches into happily ever after.

Goddess Fish Promotions said…
Thank you for hosting today
6:07 AM

MomJane said…
Loved the excerpt. It makes me want to know what is going on.
7:09 AM

Genene Valleau, writing as Genie Gabriel said…
Hello to everyone and thank you, Judy, for hosting me today! I'm excited to be here! I also want to let you all know this is free book Monday for me. THE BODYGUARD, the book that introduced the fictional hometown of Halo, Oregon where my Legacy Series takes place is a free download every Monday until Christmas at **http://tinyurl.com/aot3veu**.

In addition to a hero and heroine who face their deepest fears and find their deepest passion, this story features a rescued street dog the size of a small bear, two kidnapped kids who believe in angels, and a miracle on Christmas morning.

I'm looking forward to talking to everyone today!

Genene Valleau, writing as Genie Gabriel said…
Hi, MomJane! Good to see you here! And glad you liked the excerpt. :)
7:15 AM

Unknown said…
Thanks for the excerpt. I will also be sure to check out The Bodyguard. Thank you!

Anonymous said…
Gotta remember to snag THE BODYGUARD...this one looks lovely, too!

Genene Valleau, writing as Genie Gabriel said…
Hi, Shannon! I hope you do pick up THE BODYGUARD. I reread parts of it the other day while preparing some promotion and loved revisiting these characters. The main characters have some major emotional hurdles to overcome, but the story also has adorably realistic kids and a mongrel dog the size of a small bear. And the fictional town of Halo became the setting for my current series and latest release, CHALLENGING THE LEGACY.

Thanks for stopping by!

Genene Valleau, writing as Genie Gabriel said…
Hi, Elizabeth! Hope you download THE BODYGUARD and enjoy it! It's a nice introduction to the fictional town of Halo, Oregon, where my Legacy Series is set. :)
2:56 PM

bn100 said…
I enjoyed the excerpt.

Genene Valleau, writing as Genie Gabriel said…
Hi, "bn"! So glad you enjoyed the excerpt. Thank you for stopping by!
2:38 AM

Genene Valleau, writing as Genie Gabriel said…
Many thanks to Judy for hosting me today!

I also want to announce the winner of this week's $10 gift certificate: Sarah R!

Congratulations, Sarah! I'll be contacting you by e-mail.

Mary Preston said…
What HAD he stumbled into? Must read on I think.