This post is part of a virtual book tour scheduled by Goddess Fish Promotions. Rosemary will be awarding a signed cover flat to a commenter at every stop and a $20 Starbuck's GC and their name in her next book to a randomly drawn commenter during the tour.

A: The view inside your writing space

When I start writing a new book I see something which has sparked an idea. For Everlasting Love it was a bathtub on a deck I’d seen at an estate sale. When I saw the tub I knew that would be the opening scene of my story. Before I start writing, the opening scene is so vivid it’s like a movie in my mind, clear and precise. Sometimes I write the first scene or as much as the first chapter before I write character sketches or outline.

As I work on a book I try to write every day, which forms a continuous flow of the story. I write in layers so the first draft is rough, mostly conversation. The second layer I add the setting and movement. Usually the emotion is the last layer. I’ve tried to do this process all at once to have a final copy of the pages I write at the end of the day but that doesn’t work for me. I need to get the idea down on paper while I think of it, to get the voices out of my head.

At the moment my house is so crowded I don’t have an office to work in. My desk is in the busy family room. Although there is always family around I’ve learned to close them out when I have to. When Josh Groban is playing in my headset, his voice blocks out some of the background sound. I also take a notebook to bed with me to work on my writing. This quiet time gives me a chance to do the hard work on the scenes.

B. The view outside your window

This spring we rebuilt our raised beds for our vegetable garden. We’ve already harvested peas and a lot of lettuce. We also added some gladiolus and dahlia to the yard and the flowers are blooming in vivid colors now. My favorite place to go is the ocean, approximately an hour from our home. Even an afternoon at the beach is a great rejuvenator. When I return home I have renewed peace and can conquer the everyday challenges. 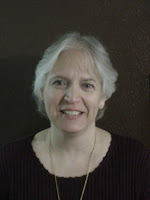 Ever since her mom gave her a romance book when she was a teenager Rosemary has enjoyed happier-ever-after stores. She has been writing most of her adult life. When she’s not writing, she enjoys spending time with her family, reading and crafts.

She has two grown children and four adorable grandchildren. She and her husband live in a small town in Oregon. www.RosemaryIndra.com

When Miranda Cummins borrows a friend’s cabin to finish writing her long overdue book, she’s surprised to find the one-room retreat already occupied by Kevin Mathews. Though she feels a spontaneous attraction for Kevin, Miranda has recently escaped a controlling husband and isn’t ready for a long-term relationship.

Unsatisfied with his occupation, Kevin is at a crossroads. Miranda understands and encourages him to look at the direction his life is going. Fired up by her encouragement, Kevin returns to Forest Ridge to resume his firefighting career.

When Miranda is threatened by her ex-husband, Kevin realizes he will do anything to protect her. Miranda has shown Kevin a new passion for life. Can he fan the flames of passion into an Everlasting Love?

Rita Wray said…
Your garden sounds wonderful. Your flowers must bring a smile to your face.
Kit3247(at)aol(dot)com
10:06 AM

Christine Young said…
I keep learning new things about you. Hope your tour is going well.
10:08 AM

Rosemary Indra said…
Thank you for hosting me today.
11:43 AM

Rosemary Indra said…
Ingeborg, It's fun having a garden with fresh vegetables and flowers. However, it needs more attention & time then I always have. Thank you for stopping by.
11:48 AM

Rosemary Indra said…
Christine,
Hi. Yes my tour is going well. I've learned knew things and it's been a lot of fun. Thank you for stopping by.
11:49 AM

Joanne said…
I remember having a vegetable garden when I was growing up. It was always great to look out the window and see the different things growing everyday.
This book sounds fantastic. Can't wait to read it.
2:55 PM

Rosemary Indra said…
Joanne,
Hi. I had fun this morning picking green beans & peas with my little grandson. He loves the fresh peas. Thanks for stopping by.
3:50 PM

Rosemary Indra said…
The view was really nice today. The weather is a little cooler. Thank you for stopping by.
10:54 PM