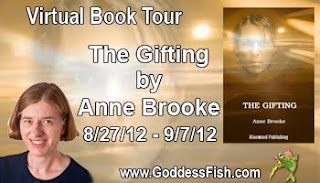 This post is part of a virtual book tour organized by Goddess Fish Promotions. Prize information is at the end of the post.

After 18 years living in a tiny flat, last year we were lucky enough to move to a house with a garden (at last!), and I’ve now become a complete garden obsessive. My study where I write faces onto the back garden, which borders a stream, beyond which are fields and a wood. So I probably spend rather too much time admiring the view instead of getting on with my writing (don’t tell my publishers!...).

When we arrived, the garden had already been landscaped by the previous owners, and included a shrubbery, a fountain, a gravel garden, the lawn, some beautiful borders and the veg patch. My husband was totally thrilled by the veg patch, but I’m a flower girl at heart, so I just want colour, scent and lots of it! One of our first jobs was to remove a couple of very tall trees which had cast the garden into shadow and lighten up the area. It was also rather overgrown (don’t ask me about the brambles, the ivy and the ground elder – I swear I still bear the scars of getting them all out …) so we cleared it all up, took out the plants we didn’t like and have spent most of the last few months replanting the beds and borders. So we now have a white flower border (my husband’s baby) and an “anything with a heck of a lot of colour” border (which is mine).

Working out how to garden has been a huge learning curve for us both but we’ve attended a couple of beginners’ courses locally and have enjoyed every minute of it. We’re always looking out for unusual plants (especially poison ones, which can be very beautiful) and finding a space for them. I even have a Happy Corner where I put any small bright flowers, and a pink carnation corner, because I’ve fallen in love with them and can’t get enough. Another plant I’ve fallen in love with is the heuchera city names series (all of which have amazingly tall flowers and last forever), and I currently have Paris, Milan, Shanghai and Hollywood. Still to collect: Gotham City (yes, really!), and Vienna, amongst others.

One of the problems we had at first was keeping the deer out. They’re very beautiful but they can tear up a garden in seconds and last year desecrated our veg patch, leaving only the rocket intact. Yikes! Since then, my husband has put a fence up which isn’t solid so we still have the view of the fields and the wood (and the deer!) and so far that’s worked. Phew. Other regular wildlife we get in the garden are a plethora of butterflies, plus woodpeckers, jays, blue tits and the stalwart old barn owl which hunts across the field. Bliss really.

I think the main character in my fantasy novel, The Gifting, would more than appreciate the view from my window as he’s very aware of the rhythm of the seasons and the importance of nature, so it’s been a pleasure keeping company with him in my writing room.

I hope you all have a wonderful summer, and happy gardening!

Giveaway competition details:
The giveaway competition: the prize is ONE Kindle ereader worth £89 if these three questions about The Gifting are answered correctly:
1. In the beginning of Chapter Four, what sound is Simon first aware of when he wakes up?
2. At the start of the Third Gathandrian Interlude, who knocks Annyeke down in his desperation to reach her?
3. What happens to Simon at the end of Chapter Six?
Answers should be sent to albrookeATmeDOTcom (and NOT left on the post), and winners will be notified as soon as possible after the tour ends.
There is also a Runner-Up Prize of THREE eBooks from my backlist (not including The Gifting) to one lucky commenter from the whole blog tour. Good luck!

Anne Brooke’s fiction has been shortlisted for the Harry Bowling Novel Award, the Royal Literary Fund Awards and the Asham Award for Women Writers. She has also twice been the winner of the national DSJT Charitable Trust Open Poetry Competition.

She is the author of six published novels, including her fantasy series, The Gathandrian Trilogy, published by Bluewood Publishing and featuring scribe and mind-reader Simon Hartstongue. More information on the trilogy is available at: www.gathandria.com and the first of these novels is The Gifting. In addition, her short stories are regularly published by Riptide Publishing, Amber Allure Press and Untreed Reads.

Anne has a secret passion for theatre and chocolate, preferably at the same time, and is currently working on a fantasy novella, The Taming of the Hawk. More information can be found at www.annebrooke.com and she regularly blogs at: http://annebrooke.blogspot.co.uk. Her Twitter page is here: http://twitter.com/AnneBrooke and her Facebook fan page is here: https://www.facebook.com/pages/Anne-Brooke/97047896458. All visitors welcome!

The mind-dwellers of Gathandria are under deadly siege. For two year-cycles they have suffered: their people decimated, their beautiful city in ruins. Their once peaceful life has descended into chaos and misery. Legends tell of the Lost One who will return at such a time to save them from their mortal enemy – the mind-executioner. This enemy knows their ways well, for he was once an elder of the city. Time is running out.

Johan and Isabella take up the quest, journeying to the Lammas Lands searching for their distant cousin and lowly scribe, Simon Hartstongue. The elders dare to hope that he is whom they seek. Not everyone shares this hope; there is one amongst them who is bound to the enemy, shielding their secret thoughts from mind links while seeking to betray Simon.

Powerful lessons are learned as they travel through the mystical kingdoms of the Mountains, the Air, the Desert and the Waters. Deadly attacks threaten total annihilation and devastating sorrow strikes. Story-telling weaves a tenuous net of protection around them, but the enemy has absolute power with the stolen mind-cane in his possession. To his surprise Simon hears its song. Desperately he tries to understand and embrace his gifting, as he struggles to comprehend his inheritance.

A strong and pure mind is needed in the battle to defeat the enemy. If you are branded a coward, a murderer and an outcast, how can you be a saviour? Doubt creeps into the Gathandrians' minds. Is Simon truly the One?

Anne Brooke said…
Many thanks - fabulous to be here! :))

Anonymous said…
There's just something about British gardens, even small backyard ones!