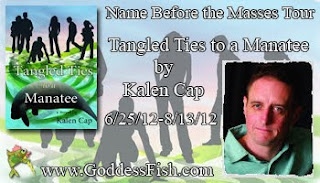 This post is part of a virtual book tour organized by Goddess Fish Promotions. Kalen will award a $25 Green Gift Card from http://green.icardgiftcard.com/ -- redeemable for GCs from hundreds of your favorite merchants to one randomly drawn commenter.

While the rest of my home is orderly, my main writing space here is my primary computer and desk, sitting in my bedroom. My bedroom is usually cluttered. But, I write first drafts often by hand. So, I wouldn't say my computer desk is the most important place for my writing. Even while editing, I often print chapters and take them with me elsewhere to initially work on them.

For first drafts, I write many places. I sometimes write downstairs at the dining room table next to the big bookshelf along the stairwell. But, I often carry my backpack filled with notebook and pens out to write elsewhere. I initially drafted parts of Tangled Ties to a Manatee in parks, gyms, coffee shops, break areas at work, on the metro bus, and plenty of other places.

Further, I regularly think through plot points while exercising and then jot down short notes to expand on later. So, I wouldn't confine the notion of my "writing space" to places of sedentary activity. Some of my debut novel's plot twists formed while running on a treadmill, only to be written longhand after a needed shower. 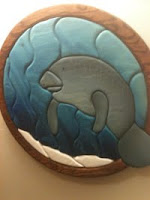 There are times, however, when the computer must be engaged in my writing. Though cluttered, my bedroom has a smattering of art pieces, most are small pictures of wildlife or natural settings. I also have a fun art piece of a manatee that I received as a gift. Something to keep me humble, if I get too caught up in grandiose self-importance about it all, is a framed poster of the Celestial Planisphere. Over the months of a year, the clutter of specific papers and books, along with two many shirts and work ties for my hourly job, will vary within sight of my desk, but the artwork stays consistent.

That doesn't convey the most important part of what my conceptual idea of my "writing space" is though. I don't do as well creatively within situations that are too chaotic and loud, nor too quiet and staid. I typically need a little something.

The most important component of my "writing space" is the soundtrack, the songs or, sometimes, music videos playing. I thrive, or falter, to the common beat. That's not to say that auditory "writing space" is confined to my personal playlist. It's piped in when I'm running on the gym treadmill, it's on the radio station playing at the local coffee shop, it's in the passing car on the street, and it's on the store's sound system when at the grocery store. The soundtrack is nearly everywhere. 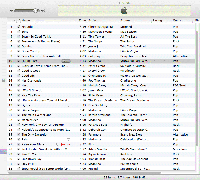 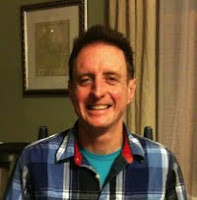 Kalen Cap is a writer living in Columbus, Ohio. Active in a variety of causes, particularly with regard to the environment, he often brings such concerns into his fiction writing.

Tangled Ties to a Manatee is his debut novel.

He has had poetry published and several plays, both one act and full-length, produced locally. Two short stories have been published as well. "Feral" is a short story published in Off the Rocks, v. 14, ed Allison Fradkin, NewTown Writers Chicago, 2010, pp. 119-126. "Transforming Oracle" is a self-published short story available at https://www.smashwords.com/books/view/29507

He can be readily connected with through the following social media profiles –
Twitter: @kalencap
Facebook: http://www.facebook.com/KalenCap
Google+ : http://gplus.to/Kalencap

A pregnant manatee is rare at any zoo, and a first for the Grove City Zoo in Ohio. Ankh is a delight to zoo patrons, a concern to its staff, and the unintentional victim of two con men. She has no idea how many human relationships, problems, and dreams tangle around her.

Jerry is a young developmentally disabled man who happily follows Ankh's pregnancy on the zoo's webcam. He has a shy crush on Janelle, a pretty college student who volunteers for his group home’s outings to the zoo.

Jerry's Aunt Vera also loves nature and runs an environmental retreat center. But all is not well, with Vera or the center. The center needs money and is under investigation as a cult.

Amid their college studies, Janelle and her friend Cecily try to help. Instead, Janelle re-awakens an old obsession in Vera when an innocent tarot reading hints at how the center might be saved.

Two bumbling con men are attempting to sabotage the region’s electrical grid as part of a lucrative scheme. But Jerry accidentally gets in their way and becomes their captive.

When the con men surprisingly succeed in bringing the grid down, it spells danger for Ankh, her unborn pup, and the many people tied to them both. With investigations of their own, Cecily and Janelle try to untangle it all to find Jerry, save a manatee’s life, and rescue Vera from herself.

Tangled Ties to a Manatee is a humorous crime thriller with environmental themes that is revealed through multiple points of view. The novel emphasizes college-aged characters, though not all, such as the developmentally disabled ones, are in college.

Unknown said…
Thank you for hosting me today. I'm interested in what others prefer in their creative or work "space" when it comes to sound. Music, silence, or something else perhaps?
8:15 AM

Anonymous said…
"Tangled Ties to a Manatee" is a fun read, I am half way through and cannot wait to pick it up again. K. Cap creates engaging characters and an exciting plot. I highly recommend.
10:03 AM

(I'm fairly certain that comment is from the one who snapped the bookcase photo in this day's post.)

Joe said…
I’m very happy for Kalen as he achieves another major goal in his life as a writer. Whatever form of writing Kalen is doing, poetry, play, or story, he makes certain that the context for the piece is in harmony with his own values and beliefs. He never preaches or lectures, but rather he creates a world in which the characters face moral and ethical choices. It is up to them and to us as the reader to make those choices.

In Tangled Ties to a Manatee, Kalen has set out a web of interlaced and randomly encountered events and people. Getting to a place where it all untangles is a total blast. Who would think that contemplating such weighty issues could be so much fun.

Unknown said…
Joe, thank you so much for your comment. You're so supportive.

Writing the "Acknowledgements" section in "Tangled Ties to a Manatee" was one of my favorite parts of the publishing process. And Joe, you figure prominently there, thanks.

Unknown said…
Thanks Ingeborg. I've been pleased with the response to the novel.
10:47 AM

Unknown said…
Okay, I'm heading out to my hourly job, but should be able to check back periodically later in the day. Thanks!
12:13 PM

Anonymous said…
There's just something about being able to write and hold printed words in your hands that helps the process. I don't know why, but it's magic. Congratulations on the release!

Unknown said…
Thanks anonymous (eai) . I did put up a YouTube video of when I received my first proof of the paperback.
12:49 PM

Rebecca Hipworth said…
This sounds like an incredibly fun book. I can't wait to try it. :)

bn100 said…
Nice post. Thanks for sharing about your writing.