This post is part of a virtual book tour organized by Goddess Fish Promotions. R. Scott Mackey will be awarding a $50 Amazon or B/N GC to a randomly drawn winner via rafflecopter during the tour. Click on the tour banner to see the other stops on the tour.

I write standing at an adjustable-height desk cluttered with notes, book ideas, marketing timelines, blank index cards for more notes, and three coffee mugs—two filled with pens and pencils, one filled with actual coffee. The three-shelved bookcase to my right stores a handful of each of my books, along with an Oxford Dictionary, Roget’s Thesaurus, Chicago Manual of Style, and other reference books.

An exercise ball, exercise roller, and dumbells are scattered about the room, the exercise ball seeming to have a mind of its own, sometimes settling into a corner, other times resting dead center in the room or underneath my standing desk. There is little ornamentation, but what there is speaks to my interests—a print of Rogers Hornsby, the baseball player, three baseball bobbleheads, and a baseball signed by the members of the Little League team I coached several years ago. Pinned to the small cork bulletin board above my desk are my upcoming travel schedule, tickets to the Senior PGA Championship, a hotel recommendation in San Francisco, and, most importantly of all, pictures of my wife, two kids, and my dog.

When I move to the closet and look inside it brings a mix of emotions. The closet was my son’s and some of his clothes still hang inside. He’s off at college now, the younger of my two kids. We see him now and again, but it’s never enough and I miss him every day, just as I miss my daughter. There’s also a bookshelf in the closet and it is filled with about thirty books on college football, the subject of my next non-fiction book. The books make me anxious because I don’t know when I will be able to get to that project, one that will take two or more years to complete. The microphone mounted atop a tall stand also makes me anxious. I’ve been planning to do some podcasting, maybe even some voiceover work, but there aren’t enough hours in the day. I shut the closet door but the mix of nostalgia and anxiety stays with me.

Back at my standing desk, I work on Courage Lies Beneath, book number four in the Ray Courage Mystery Series. I pause to think about my writing space. I hadn’t planned on it making a statement about who I am. Funny how it truly does.

Ray Courage’s wife Pam died thirteen years before in a car accident. Or did she? Ray’s world is turned upside down when he receives a series of e-mails from someone claiming to be his dead wife, accusing him of attempting to kill her and vowing revenge. Ray sets out to find the identity of the e-mailer only to discover the circumstances of his wife’s apparent death appear to be all but accidental.

Soon Police Detective Carla Thurber comes to suspect Ray of killing his wife, and of a subsequent murder of Pam’s confidant. Meanwhile, a murderous predator who does not want the facts of Pam’s death to surface aims to stop Ray. In the greatest challenge of his life, Ray must outrun the police and elude those who are out to kill him as he seeks the truth about his wife’s death.

After she left I took out my phone and opened the email from Pam1111, fully intending to delete it after a quick glance. Instead of some offer for an erection booster or the chance to aid a Nigerian princess, the message gave me an immediate chill:

Ray,
How could you have done that to me 13 years ago? Me, the person you said you loved? Well, it didn’t work. I’m not dead and I am going to make you pay after all these years. Better look over your shoulder.
Pam 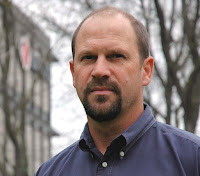 Scott Mackey lives in Northern California, where he writes both fiction and non-fiction. His first book, Barbary Baseball, achieved critical acclaim from baseball historians for its quality research and writing. He followed that with two young adult novels. His popular Ray Courage Mystery Series includes Courage Begins, Courage Matters, and Courage Resurrected. The fourth book in the series, Courage Lies Beneath, is scheduled for release later in 2015.

Scott's career arc has included stints as a corporate communications manager, college professor, copywriter, bartender, and youth sports coach. In addition to obsessing over punctuation and grammar, he cares about his family (including his dog and cat), the San Francisco Giants, and his rather sad golf game.

The first book of the series, Courage Begins is FREE from Amazon or Barnes and Noble.