This post is part of a virtual book tour organized by Goddess Fish Promotions. Leslie will be awarding $25 Amazon or B/N GC to a randomly drawn winner via rafflecopter during the tour. Click on the tour banner to see the other stops on the tour.


A Morning with Leslie D. Soule

So I don’t usually get many full days off nowadays, but you’re welcome to accompany me on one.

At some point, I’ll be waking up, and let me tell you, I am NOT a morning person. So I’ll need some coffee or tea. I’ll spend a couple seconds pondering – coffee, or tea? 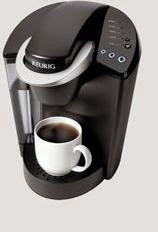 The rest is easy – the additions are either sugar and creamer for my coffee, or honey for my tea. I’ll take the steaming hot beverage and set it aside, because I feel something brushing up against my leg. Why, it’s Ginger! Hi there, Ginger! 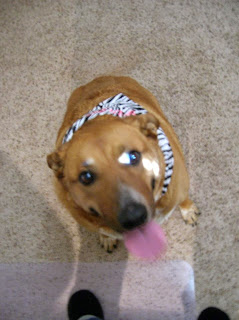 I have to give Ginger some attention before I can do much else. So I pet Ginger and put some food and water in her bowls, and maybe give her a doggie treat. That should keep her busy for a little while. I use these precious minutes to take my beverage into the computer room and surf the internet for a while. I have to at least check my e-mail and Facebook. Something might have happened overnight. You never know. But soon enough, Facebook sucks me in and I see all these posts about how productive the other authors out there are being and so I decide to log off. After all, I should be productive too. So I sit down with paper and a pen, and try to will the words to come… 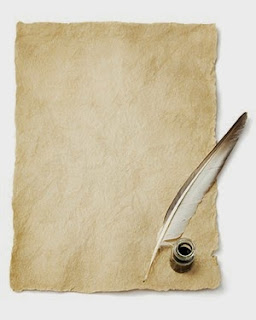 “Oh well,” I say to myself. “I need a shower.” I set down the pen and paper, get up and make my way to the bathroom, where I turn on the water and bid good riddance to my clothes. Then, as soon as I step into the shower, the instant that the water hits my naked flesh, inspiration strikes.

And then my morning can truly begin. 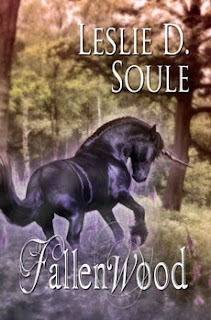 Fallenwood – where your dreams and nightmares are only a portal away…

Fallenwood—a land where magic is the life force, dragons are sages, and wizards good and evil battle for supremacy. When 23-year-old Ash is thrust into the middle of Fallenwood’s power struggles, she is also forced to face her own inner battles. Life on Earth was hard enough on Ash, who is locked in grief for her stepfather. Now, the fate of Fallenwood rests on her shoulders. She must destroy the Great Crystal—the catalyst for all the land’s magic. As the kingdoms prepare for war, Ash must look inside to find the power to save the world, and herself.

The monk held up a hand. “That’s quite enough. She’s coming with me.”

“You can’t do that,” the fire-haired royal servant sputtered. “As stated in Section 6 point 8, Subsection B of Article 1 dash 9, no one who is not a servant to the royal throne of any kingdom is permitted to…”

“She’s still coming with me. You can argue about it ‘til the realms reconnect if you want, but that’s how it’s going to be.” His voice was powerful, yet soft and reassuring.

A bright flash seared the woodland clearing, lighting up the night, revealing the towering forms of pines. To Ashley’s amazement, floating inches above the cloaked man's hand was an orb of fire. The flaming orb swirled beautifully, shades of red, orange, yellow, and white as though it were a living thing. The heat of the flame warmed the night air, and the sphere levitated as though dangled from a string.

“I said she’s coming with me,” the monk repeated, the fireball suspended menacingly and persuasively in ether.

The man in black gritted his teeth, spat at the ground, and stared at the monk. “So that’s how you want to play it, eh, Will?”

Will shrugged. “Nothing personal, Rupert,” he answered casually. “It’s just that I prefer to greet our guests and show them around myself.

Rupert grumbled under his breath. He turned and walked toward his horse, a large black Andalusian.

About the Author: My name is Leslie Soule (pronounced "soul" like that part of you that is innate). I am an author who loves to try new genres and Sacramento, California is my hometown. I have an M.A. in English from National University and am a member of the English Chapter of the Sac State Almuni Association, and the Sacramento branch of the California Writers Club (as of June 2014).

Goddess Fish Promotions said…
Thank you for hosting
5:06 AM

MomJane said…
Loved the picture of your dog. I also enjoyed the excerpt.
9:26 AM

Poland sonal said…
Luckily came to your web place.
Hope to connect with all EBooks Authors helping each others.
http://amazonebooksbase.blogspot.com/